Did you know that Salman Khan loves Maggi? Watch the video to know how much he loves his Maggi! 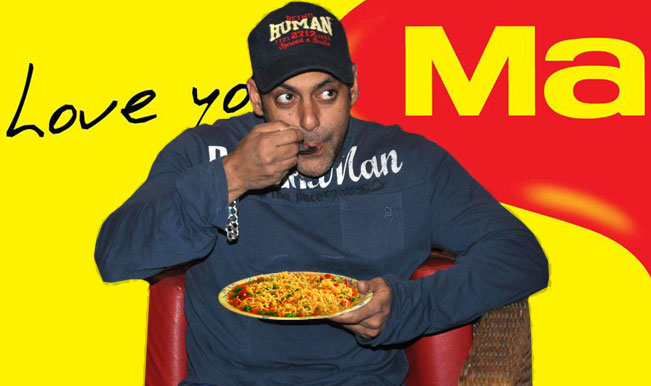 Did you know that Salman Khan loves Maggi? When the whole world is going berserk over the Maggi row, only Salman Khan seems to be the person who is head over heels in love with Maggi. People are concerned will they be robbed off their favourite comfort food, without giving a hoot about the impact on health. Leading Nutrition, Health and Wellness Company Nestle was summoned today after the samples of Maggie were found to be not safe for consumption due to the presence of high lead and monosodium glutamate (MSG). Also Read - Varun Dhawan-Natasha Dalal Wedding LIVE From Alibaug: Karan Johar Reaches Alibaug to Bless His 'Student'

When brand ambassadors of Maggi; Amitabh Bachchan, Madhuri Dixit and Priety Zinta are being targeted for promoting Maggi, Sallu seems to be the only hunky dory guy who has professed his love for Maggi. Not caring about the ongoing controversy about the instant two-minute noodles, Salman is all praise for the Maggi which is synonymous for the instant noodles here in our country. Also Read - Bigg Boss 14 Weekend Ka Vaar With Salman Khan Won't Happen as Actor Attends Varun Dhawan-Natasha Dalal's Wedding

Arnt you curious about Salman’s sudden fascination for Maggi amidst all the controvery? Don’t worry the actor is not all gaga about the instant noodles, but we are talking about his character Prithvi in love with Maggi from the movie Love! Love is a 1991 romantic flick of a Telugu remake starring Salman Khan and Revathi Menon. Watch the video below to know how much he loves his Maggi, that he actually sang a whole song dedicating to Maggi; Maggi Meri Priyatama!