Salman Khan‘s sister Arpita Khan Sharma recently celebrated her son Ahil Sharma’s birthday and the pictures from the celebration soon went viral on social media. In one of the pictures, a social media user for passed demeaning remarks about her son Ahil. Arpita did not keep quiet but chose to give him a strong reply. Also Read - Mahima Chaudhry Reveals 'Subhash Ghai Bullied Me, Asked Producers Not to Cast Me'

“Guys you all are disgusting. At least spare children in negative comments,” she wrote. Also Read - Bigg Boss 14 Promo Out: Salman Khan Reveals New Logo of The Show | Watch Here 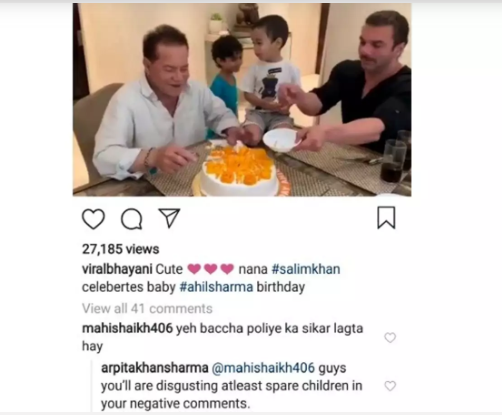 While she deleted the comment, its screenshot went viral. Arpita, who is married to actor Aayush Sharma, is not new to dealing with trolls.

Back in 2016, she wrote an open letter requesting her “well-wishers not to waste their time by reacting to random, jobless, insecure, jealous people”.

She wrote, “Hey, I would request all out well-wishers not to waste their time by reacting to random jobless, insecure, jealous, people. Insecurities & jealousy can make you loose the plot at times. Just ignore them & move on don’t react to their comments as then you are giving them more importance. And for those people who have an issue with the following:- my pictures, my family, my weight, my face, my colour & what I am doing with my baby boy & how we are taking care of them & my husband & our lifestyle”.

"Learn to live and let live"

“I wonder how jobless or bored you are that you are busy following or visiting a profile you don’t like and have so many issues with. Why don’t you do something better with your times and life rather than stooping down to a level of barking dog and displaying a very low line character of yourself. Anyway, have a great day. God bless,” she further added.