The first teaser of Sultan, the film starring Salman Khan, Anushka Sharma and Randeep Hooda, has crossed 10 million views on YouTube within a week of its release. 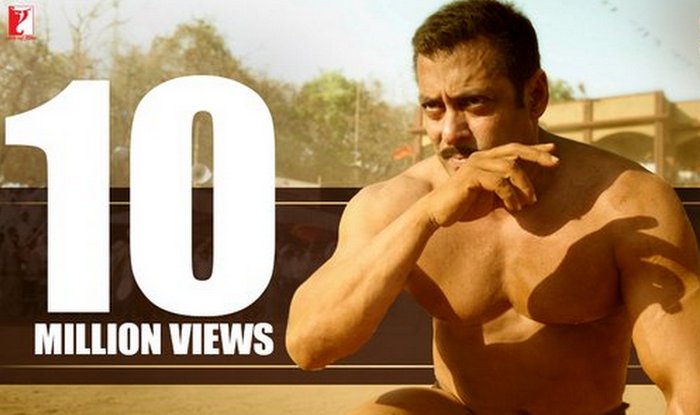 Also Read - Katrina Kaif-Vicky Kaushal To Have Romantic Honeymoon At Maldives, Deets Inside

The first teaser of Sultan, the film starring Salman Khan, Anushka Sharma and Randeep Hooda, has crossed 10 million views on YouTube within a week of its release. The Sultan teaser was first released on April 11 and later showcased in Shah Rukh Khan movie FAN that released in theatres on April 15. The official Twitter page of Sultan revealed, “The true Haryana Kesari is here! #SultanTeaser crosses 10 Million Views!” Also Read - India's Most Searched Personalities on Internet 2021: From PM Modi, Aryan Khan To Sidharth Shukla Know Who Topped List | Watch Video

Twitter is abuzz with the the hashtag #SULTANTeaserFastest10MViews, with more than 10,000 tweets around Salman Khan’s much awaited Eid 2016 release – the film will release on July 6. Sultan is produced by Yash Raj Films and directed by Ali Abbas Zafar. The movie has Salman playing a wrestler named Sultan, who also has a face-off with his lady love Anushka in the film. Watch the teaser of Sultan here!  Also Read - Katrina Kaif, Anushka Sharma, Deepika Padukone - Bollywood Actresses Who Turned Punjabi Brides on Their Big-Day

Now we can’t wait for the full blown official trailer of Sultan, with Salman’s wrestler’s body and his charm! The last time we saw him doing some Dhobi Pachad moves in his film Bajrangi Bhaijaan, and now want to see him in action in the akhada. Are you as excited about Salman Khan’s Sultan as us?