Salman Khan recently shared a new poster of his upcoming film Bharat in which he looks young and stylish. In a white embellished suit with his hair neatly combed and a stylish pair of glasses on eyes, Salman looked a man from 20s. The Dabangg actor has a huge female fan following. A new fan has been added to his list is Hollywood actor Paris Hilton. Also Read - Bigg Boss 14 SHOCKING Eviction: Eijaz Khan Eliminated And It's Confirmed!

As soon as the Bharat poster was unveiled on social media by Salman, fans went crazy. One of the comments posted was from Paris Hilton. She reacted to Salman’s youthful looks with a smiling emoji with black sunglasses. The emoji means ‘looking cool’. Also Read - Salman Khan to Stay in Bio Bubble as a Precaution While Shooting For Antim, Bigg Boss 14

In this new poster, the actor looks much younger than his age. “Jawaani humari Jaaneman thi!” Salman captioned the poster. Also Read - Bigg Boss 14: Jasmin Bhasin Opens Up on Her Parent's Reaction To Aly Goni, Says 'They Have Been Misunderstood' 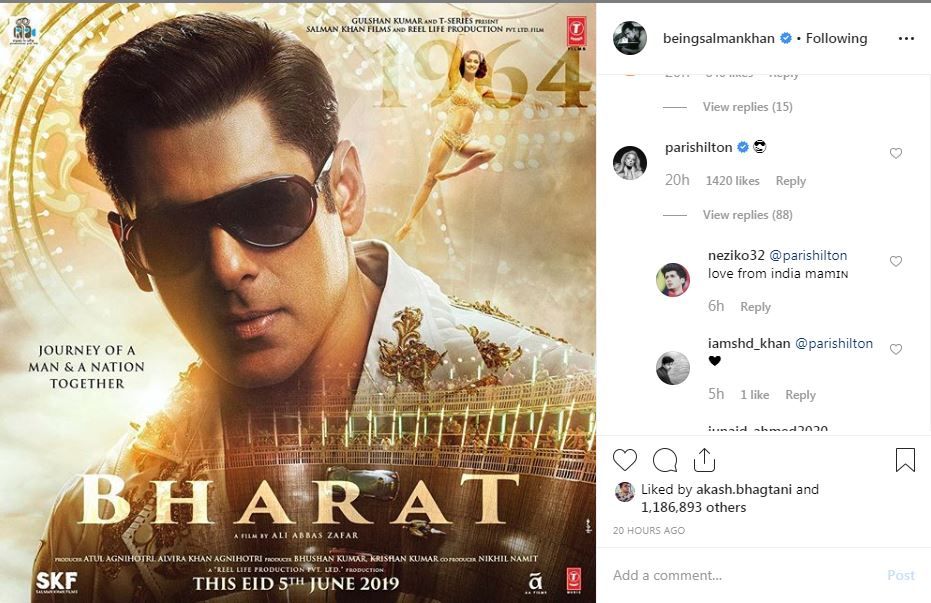 The Bharat poster also features the caption – ‘The Journey of a Man & a Nation Together’. Another detail of the new poster is the glimpse of actor Disha Patani. She plays the character of a trapeze artist and the poster has her dressed as her character in a golden pair of sequined separates. The 60s kind of short hairdo further adds perfection to her look. Directed by Ali Abbas Zafar, Bharat is an official adaptation of the South Korean film Ode to My Father. The film also features Tabu, Jackie Shroff, Sunil Grover, Disha Patani, Nora Fatehi and Aashif Sheikh, Bharat is slated to release this Eid on June 5.