Sameer Sharma had featured in Bollywood film Hasee Toh Phasee. His co-star actor Sidharth Malhotra mourned and shared a still from the movie.

Another established TV actor Sameer Sharma committed suicide two days ago in Mumbai’s Malad. He was found hanging in his Malad apartment on Thursday morning. Mumbai Police has suspected it as a case of suicide. Popular for playing the role of Kuhu’s father in Star Plus’ show Yeh Rishety Hain Pyaar Ke, allegedly hanged himself two days back. The 44-years-old allegedly died by suicide at his home in Neha CHS building of Malad West. Also Read - Sameer Sharma Death Case Update: Mumbai Police Doing Careful Probe After Lapses in SSR And Disha Salian's Cases

Sameer Sharma had featured in Bollywood film Hasee Toh Phasee. His co-star actor Sidharth Malhotra mourned and shared a still from the movie on his Instagram story, “Really sad and unfortunate”. Also Read - Sameer Sharma Death News: Friend Geetanjali Tikekar Reveals 'he Was Lonely' And Would 'Want His Space' 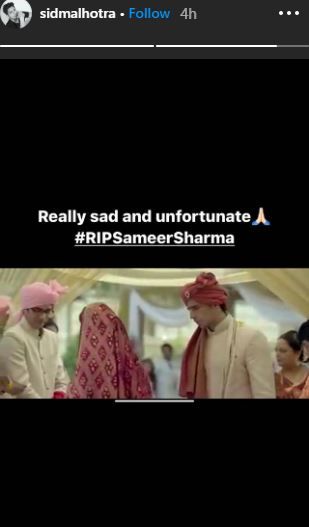 Gurmeet Choudhary who has worked with Sameer wrote, “Goodbyes hurt the most, when the story was not finished….RIP #SameerSharma 🙏🙏”.

Goodbyes hurt the most, when the story was not finished….RIP #SameerSharma 🙏🙏

#SameerSharma trends as netizens and TV actors grief the demise of the late actor. Actor Nakuul Mehta wrote, “Never knew him personally. Hope he finds his peace. These have been extremely hard months for everyone. If this doesn’t make us introspect on our own conduct & heart, don’t know what will (sic).”

Gaurav Chopra, who was Sameer’s co-star in Dil Kya Chahta Hai, penned down a lengthy note on Twitter. He wrote, “#dilkyachahtahai (2005) on #starone was where I met @samirsharma5d for the first time. He was from bangalore and debuting with the show. It was a show about 4 friends ; samir played Nitin Pasricha my character’s childhood friend.Some very warm and happy moments were spent here (sic).”

Samir Soni, who also was a part of Dil Kya Chahta Hai reposted one of Sameer Sharma’s poem on Instagram and wrote, “RIP my friend, this hurts.”

Kavita Kaushik condoled the actor’s death on Twitter and wrote, “While the whole country is busy fighting each other’s opinions over religion n politics, there are humans struggling to just survive, yet another actor ended his life , perhaps no one is genuinely listening and no one really cares unless it fulfills an agenda. R.i.p Sameer (sic).”

Kritika Kamra wrote, “I hope they let you rest in peace Sameer Sharma.”

Sameer Sharma’s body was discovered by a watchman who was strolling at night when he saw a body hanging from the ceiling of the apartment. The watchman informed the building supervisor who reported the incident to the police. No suicide note was discovered by the police at the apartment. A case of accidental death has been registered and the body has been sent for autopsy.