As the video went viral, fans started questioning: Why did Abhishek treat Aishwarya like that? Is he insecure of his wife's success? 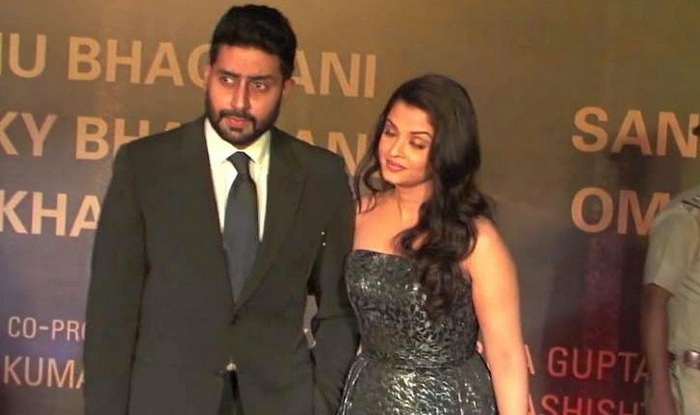 Abhishek Bachchan is all praise for his wifey Aishwarya Rai Bachchan‘s performance in the biopic Sarbjit. He not only praised the film, but also his ex-Miss World wife’s daring to be so ‘fearless‘ in her performance. But that was after having watched the film at the Sarbjit premiere in Mumbai on May 18, where the who’s who of Bollywood turned up. But we couldn’t believe our eyes about how Abhishek treated Aishwarya on the red carpet of the Sarbjit premiere! What exactly happened? Also Read - Movies to Watch Out For in 2022: From Alia-Ranbir's Brahmastra to Katrina's Merry Christmas

Well, a video from the Sarbjit premiere by Lehren has gone viral. It shows that although Abhishek and Aishwarya walked in hand-in-hand on the red carpet, he moved away as soon as he saw the shutterbugs. Even as the photographers were calling out to Abhishek to pose for the cameras with his beautiful wife, he ignored them and went and bonded with his mother-in-law instead! Aishwarya was embarrassed and told her dad to reach out to Abhishek. Even as he calmed her down, Abhishek came to Aishwarya. Also Read - Urfi Javed Recreates Aishwarya Rai’s ‘Crazy Kia Re’ Look in White Side Cut Top, Invites Trolls

But for a short while. Abhishek’s mood was clearly off and he seemed least interested in posing with Aishwarya on the red carpet. He soon walked off, and Aishwarya seemed upset, calling out him in vain. We wonder what happened to the usually loving Abhishek! (Sarbjit critics’ movie review)

As the video went viral, fans started questioning: Why did Abhishek treat Aishwarya like that, and in public? Is he insecure of his wife’s success? We think he might be just in a bad mood, or probably craving for his wife’s love and must have had a simple tiff. Watch the video here and tell us what you think!

Sarbjit is directed by Omung Kumar and released in India on Friday, May 20, 2016. The film, starring Aishwarya Rai Bachchan, Randeep Hooda, Richa Chadda and Darshan Kumar, is the biopic of Sarabjit Singh, an Indian who crossed the border into Pakistan by mistake and ended up spending his entire life in jail there as a suspected spy. (ALSO READ: Sarbjit movie review) Sarabjit Singh is played by Randeep Hooda and his sister Dalbir Kaur is Aishwarya Rai Bachchan in the film. Dalbir fought for Sarabjit’s release but in vain. He died in the Pakistani jail in a suspected murder by inmates.