“Semiotics of Islam”: A Quiet, Important Film For Religious Acceptance

"Semiotics of Islam: A Primer for Kuffar" almost silently shows us the hypocrisy and ignorance associated with Islamophobia. 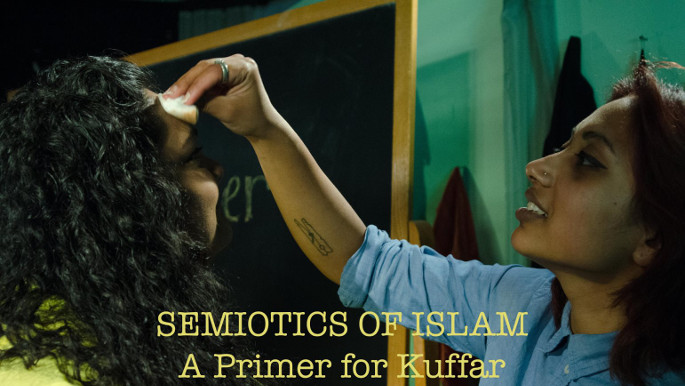 Understanding the religion of Islam might be difficult for some. It might not be a goal. It might not be important. It might be an outrage to their own culture and religion. But that kind of thinking and close-mindedness is what causes violence and hate, which is more of an outrage than anything else as understanding can take just minutes and leads to a lifetime of openness. This is the message I felt strongly while watching Fouzia Najar’s new short film “Semiotics of Islam: A Primer for Kuffar,” which premieres at the Queens World Film Festival tonight at 6 p.m. at P.S. 69 in Jackson Heights, N.Y. Also Read - Hijab-Clad Muslim Woman Says She Was Forcibly Removed From US Aircraft As White Passenger Felt 'Uncomfortable'

The piece is a one-woman performance structured in the same vein as Martha Roster’s 1970s feminist short film “Semiotics of the Kitchen,” which was considered a critique on the roles of women in society at the time. But Najar’s film, one that features a memorable performance from Adeeba Rana and gives us a complete look at items most commonly found in a Muslim household, is not a critique of Islam. It is quite the opposite. With it’s transitions involving videos of news anchors, mostly on FOX news, debating about different stories involving Islamic culture and relating it incorrectly to extremism, “Semiotics of Islam” almost silently shows us the hypocrisy and ignorance associated with Islamophobia. Also Read - #BoycottFrenchProducts Trends on Twitter After Emmanuel Macron's Comments on Islam & Prophet Mohammed Spark Outrage

It might only be a seven-minute film but it packs quite the punch and is a necessary watch for anyone trying to fight religious ignorance, or on the opposite side, anyone who can’t understand how important acceptance of Islam, acceptance of all religions is vital to everyday culture.