Mumbai: These days Suhana Khan has been making her Instagram feed so HOT with her sultry pictures. Her recent set of glamorous sunkissed photos have raised the temperatures. Suhana Khan looks stunning while posing with a can of cola. The gorgeous Suhana Khan has been clicked by her mother Gauri Khan who is also in New York. Dressed in a white tank tee and denim shorts, Suhana looks every bit fabulous. Apart from the pictures, it’s the comment section that has gone viral- all thanks to Shah Rukh Khan for being a typical dad.Also Read - Shah Rukh Khan Features Again on Burj Khalifa, Om Shanti Om Song Plays at The Musical Fountain

Bollywood King Khan has a perfect response to daughter Suhana Khan’s Instagram post that’s captioned as, “Pretend it’s a Pepsi and I’m Cindy Crawford.” Shah Rukh Khan wrote: “Can I pretend it’s you and the cola is incidental… and still appreciate the picture?”. SRK’s comment turned out to be the most liked on Suhana’s post – over 4486 (and counting) in just a few hours! Also Read - Deepika Padukone Admitted to Hospital After Complaining of Uneasiness 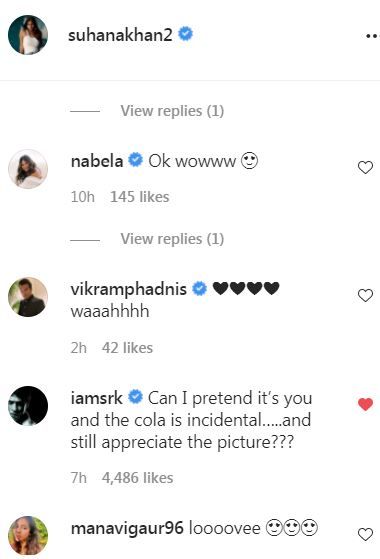 There were several others who cheered for Suhana Khan in the comments section included Maheep Kapoor, who wrote: “Stunning,” while her daughter Shanaya dropped a bunch of red hearts. Seema Khan and Bhavana Panday too reacted with the fire and heart emojis. Meanwhile, Suhana’s cousin Alia Chhiba gave this shout out to her: “What are you!”

Suhana Khan is currently in New York and is pursuing a film studies course from the New York University. However, her plans to foray into Bollywood are still not known.