Bollywood superstar Shah Rukh Khan has joked about “being at home” over the past one and a half years. On Friday, Gauri Khan tweeted a picture where she poses with husband Shah Rukh and his wax statue at Paris’ wax museum Musée Grévin. “Two much to handle… @iamsrk #museegrevin,” Gauri captioned the picture on her verified Twitter account. Also Read - Dream11 IPL: Shah Rukh Khan Wishes Luck to Mumbai Indians-Chennai Super Kings Ahead of IPL Opener, Post Going Viral 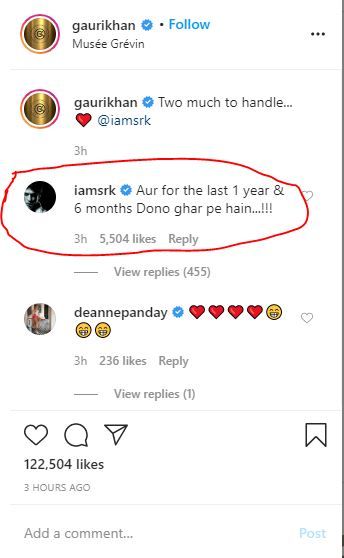 Shah Rukh Khan’s tweet seems like a gentle jibe at himself, given the fact that he has not done a new film since Zero hit the theatres in December 2018. Commenting on SRK’s tweet, fans expressed how much they are missing his films. “The more of you the merrier. Wished you had doubles all over the world. Every city…Wish you were here more often… Shine …Love you unconditionally…@iamsrk,” tweeted a fan.

“I just love you, Shah. Don’t get the full meaning, but a smile of yours tells me the only thing I need to know. Thanks for the tweet. You are as missed as loved. Always. Be well and enjoy life. Wishing you endless reasons to smile like that,” shared another fan.