The actress is back to work post marriage with Virat Kohli.

Anushka Sharma is back in the country after her break in South Africa with Virat Kohli. The actress was spotted at the airport yesterday and today Ms Sharma has resumed work on Aanand L Rai’s Zero which also stars Shah Rukh Khan and Katrina Kaif. As soon as she reached the set today, she was surprised and welcomed with Shah Rukh Khan and Aanand L Rai with a bouquet of beautiful flowers. SRK made sure the actress feels extra special on her first working day post marriage to Virat Kohli. Also Read - IPL 2020, Match 10 Preview: Royal Challengers Bangalore vs Mumbai Indians

The Zero actress seems to be super thrilled to be back on the sets of the film and meet her team. She posted a story on Instagram and also thanked SRK and Rai for the floral welcome she received on the set. Take a look at the post below. The actress was recently seen enjoying some time off work and enjoying marriage with Virat. The duo was in Finland for their honeymoon after which they had a Delhi and Mumbai receptions for their families and friends. Soon after this, the newly married couple left for South Africa as the cricketer had to be there to begin practice on his series against SA. Also Read - Suhana Khan's Transformation From Hoodie to Glam Chic Look is Mesmerising, Pictures Go Viral 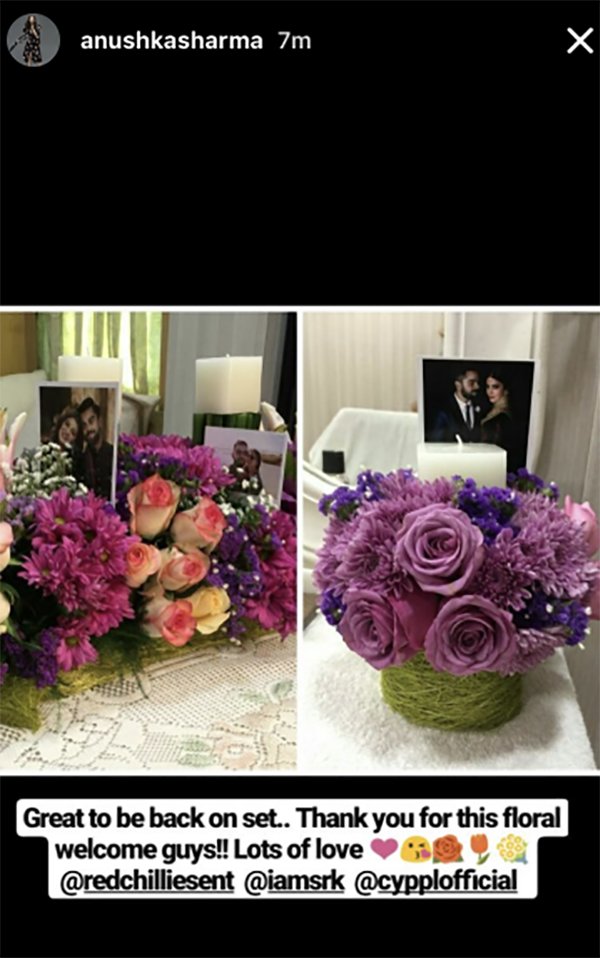 Apart from this film, the actress will also begin the promotions of Pari and is all set to release on February 9. As per reports, the film will clash with Sidharth Malhotra – Manoj Bajpayee’s Aiyaari. The Neeraj Pandey film was to release on January 26 but reports claim that the makers will now shift their release date as Sanjay Leela Bhansali’s Padmavat is all set to release on the Republic Day weekend along with Akshay Kumar’s PadMan. Though these are reports, there is no official announcement on the release date of SLB’s next and change in date of Aiyyari. Keep watching this space as we’ll be the first ones to update you with this info. Also Read - IPL 2020: RCB Skipper Virat Kohli Trolls Yuzvendra Chahal in Hilarious Manner