The movie is based on six jerks planning to rob handful of diamonds that are worth crores. And to accomplish this mission they are take part in World Dance Championship. The movie stars Shah Rukh Khan, Deepika Padukone, Abhishek Bachchan, Sonu Sood, Boman Irani, Vivaan Shah and Jackie Shroff in lead roles. 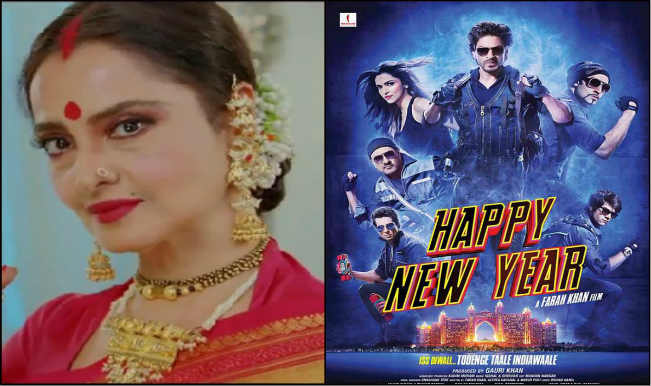 Reports of Rekha’s comeback film Super Nani clashing dates with Shah Rukh Khan’s Happy New Year (HNY) are making a buzz. Now that the trailer of Super Nani is out, we can predict which of the two movies releasing this Diwali are worth a watch. The Farah Khan-directed Happy New Year is in the news for quite sometime for its music launches and promotional jigs. Happy New Year is based on six jerks planning to rob a handful of diamonds that are worth crores of rupees. And to accomplish this mission they take part in a World Dance Championship (WDC). Apart from Shah Rukh Khan, the movie stars Deepika Padukone, Abhishek Bachchan, Sonu Sood, Boman Irani, Vivaan Shah and Jackie Shroff in lead roles. Also Read - Shah Rukh Khan’s Next Project Confirmed! SRK To Play Lead in YRF’s Pathan Opposite John Abraham

But give you 4 reasons why you can choose to skip Happy New Year this Diwali! Here goes: Also Read - Deepika Padukone’s Immense Love For The Trending And Bright Neon Colours

Happy New Year is not the first movie with on the concept of robbery. Yash Raj Films’ all three installments of Dhoom are one of the popular movie series on robbery or heist. Adding to the list are movies like Oye Lucky! Lucky Oye!, Shor in the City, Ghanchakkar and Aankhen, among others. So the movie plot of HNY would be quite common, only the situations and characters in the movie would vary.

Promoting concepts of robberies and plans of such social crimes via movies is not a good idea. Thieves and gangs take such movies as an inspiration to actually accomplish such heists. The story and plot of Happy New Year are fictional and all the aspects are adjusted to fit the concept of the movie. These facts are generally ignored by the gangs who blatantly go on to copy them, which can prove fatal and land them in trouble.

The songs of Happy New Year, composed by Vishal-Shekhar, are loud and jazzy. Additionally, the movie is a musical heist which means the plot would not be given major emphasis in Happy New Year. Songs like Indiawaale, Satakli and Nonsense Ki Night, among others have all odd lyrics that make no sense. The only romantic medley Manwa Laage from the movie is quite bearable.

Diwali being a festival week, there are high chances of family outings during the occasion. Deepika Padukone’s skin show in the song Lovely can also get the movie U/A rating. Happy New Year can also have some adult content (love scenes and foul language) and moreover the robbery concept in the movie can make it quite uncomfortable to be watched with the family.

If you take into consideration these reasons, Rekha’s Super Nani can be given a try this Diwali. The family drama is women-oriented and promotes a strong concept of women empowerment. Super Nani stars Rekha, Sharman Joshi, Randhir Kapoor and Anupam Kher in prime roles. Directed by Indra Kumar, the movie is a must try for Rekha’s exceptional acting skills, her revamped look and above being her super comeback in Bollywood.