This is not the first time that Shahrukh Khan has said something against Aamir Khan. 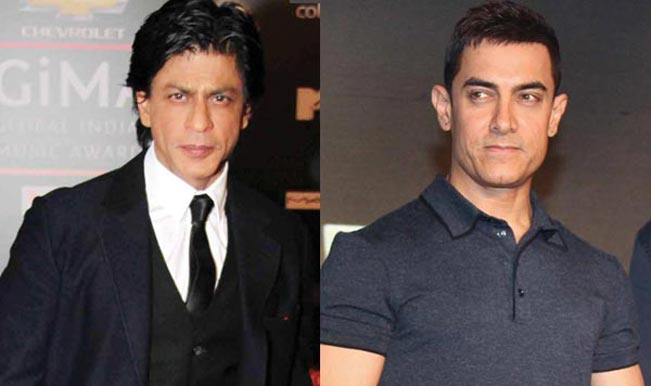 With Happy New Year nearing release, Shahrukh Khan is leaving no stone unturned to promote the Farah Khan multi-starrer. King Khan who was in Vancouver for Slam! The Tour on Saturday along with the entire team of Happy New Year, took on Mr Perfectionist Aamir Khan and called him ‘Aadha Actor’. Also Read - Bigg Boss 14 Promo Video: Makers Show Radhe Maa Inside The House, Is She Part of Show?

As singer-composer Yo Yo Honey Singh missed the tour because of some injury (really?), the organisers changed the format of the concert. The entire cast was requested to sing any song on stage. Boman Irani, who is part of Happy New Year, chose to Give Me Some Sunshine from 3 Idiots. Irani played the role of Prefessor Viru Sahastrabudhe in the Raj Kumar Hirani film. As soon as he finished the song, Shahrukh Khan asked Boman Irani the name of the movie from which the song was. Boman innocently replied ‘3 Idiots’. Also Read - Bigg Boss 14 New Contestants List: Seven Celebs From TV Who Are Most Likely Entering The House

Shahrukh Khan next asked Irani the name of the lead actor in the movie. Boman mimicked Shahrukh from Happy New Year’s trailer, rubbing his fingers through his lips blabbering Aamir Khan’s name. When Shahrukh Khan told him to say clearly, Boman screamed Aamir Khan. This is when Shahrukh Khan used the derogatory term for Aamir Khan.

“Itne Bade Bade Stars Stage Pe Khade Hai, Yeh Aadhe Hero Ka Song Kyun Gaaya?” (There are so many renowned celebs on stage, why you chose to sing a song of a ‘Half-Actor’)

The comment was in a really bad taste even if it was intended to be funny. But this is not the first time that Shahrukh Khan has said something against Aamir Khan. Both the actors have been involved in a similar war of words in the past. He even made fun of Aamir Khan for giving Indian award shows a miss and attending the Oscars. Recently Shahrukh made fun of the first PK poster starring Aamir Khan.

Produced under the banner of Red Chillies Entertainment, Happy New Year is slated to release on Oct 24. This multi-starrer movie stars Shahrukh Khan, Deepika Padukone, Boman Irani, Abhishek Bachchan, Sonu Sood and Vivaan Shah in pivotal roles. Being the most awaited movie of 2014, the movie is expected to break records of Salman Khan’s Kick.