Shahrukh Khan has the sexiest back in B-town 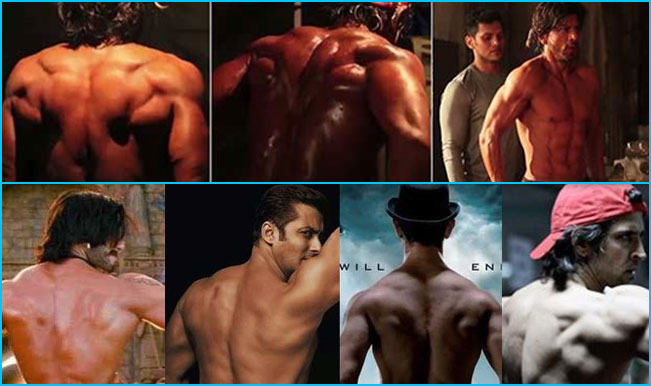 While everybody is going ga ga over the megastar’s meticulously chiselled abs, we at India.com decided to shift our focus on the other interesting part of King Khan’s enviable anatomy-his sculpted back, what else! SRK has truly caught us by the eyeballs to marvel at his super fit bod-achieving that at the age of 48, that’s really commendable! ( almost 49, actually, considering the fact that his birthday is just over a month away from now) and bwoy! hasn’t the megastar proved that you can achieve almost anything if you set your mind on it.  Here’s Shahrukh Khan showing off his muscular back to make men go green with envy and ladies week in their knees.  So we decided to compare his best back side with that of the other leading stars. Also Read - Bigg Boss 14 House Pictures: Rainbow Couch, Metallic Decor And More - Sets go More Stunning This Year

Salman, as we all know, is not exatcly impressive with his beefy back, but for those who prefer proportion over perfection, Sallu still grabs a lot of attention. The bonsai stud Aamir Khan gave a glimpse of his really sexy back in Dhoom 3 and then made some ladies curious, who had even started entertaining the possibility of Mr Perfectionst showing his..err buns, especially after the release of PK poster which was as risque as it was ‘revealing’. Also Read - Ranveer Singh's Efforts to Make Indian Sign Language an Official Language Are On

Moving on,Ranveer Singh sported a nice back in Ram-Leela. The young actor looked hawttt in a dhoti that was tied dangerously low to give us a generous glimpse of his errr..toned behind. But by far, it is Hrithik Roshan who has impressed us the most with his rock solid, full of muscles and fabulously toned back. Remeber the scene from Jodha Akbar where Aishwarya Rai Bachchan’s character admire the Greek God’s oil slicked super sexy  back? Now you know what are talking about, right!

Take a look at this picture and tell us whose back you find the sexiest?