Salman Khan's 'fake abs' video got permanently deleted. So, is this a sign of any insecurity? 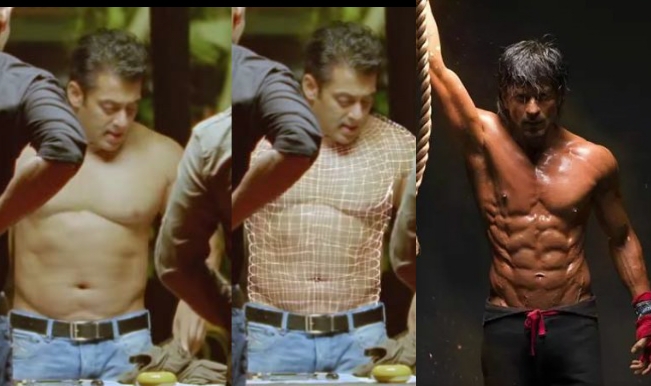 Few days ago, renowned photographer Daboo Ratnani tweeted a photo of Shahrukh Khan strongly built with 8 pack abs. It raised many alleged accuses from a section of fans, known as Salman Khan fans, that the image was manipulated using photoshop and VFX (Visual Effects). Immediately an another photo was also posted, but still many believed that Shahrukh Khan is not able to build a physique like this (Like they believed Shahrukh will not be able to perform comedy during Chennai Express). Also Read - Salman Khan's Lawyer Denies Actor Having Stake in KWAN Management Agency, Calls Media Reports 'False'

After some conflicts between Shahrukh and Salman fans, a video of Salman Khan came into the limelight. The video was of Salman Khan’s fake abs during the shoot of Ek Tha Tiger. It was clearly shown that how Salman took help of VFX to flaunt his fake 6 pack abs on screen. But fans ignored by saying ‘Salman Khan was not well at the time of Ek Tha Tiger shoot’. The claim-game was on from both the sides, and there came a twist in the fight. Red Chillies posted an official video of Shahrukh Khan doing the abs workout. This 42 second teaser was a answer to those who thought SRK’s abs were fake. Shahrukh Khan’s rigorous efforts were clearly visible in the video (Now someone please don’t claim they were VFX too). Also Read - Bigg Boss 14 New Promos: Sidharth Shukla, Hina Khan And Gauahar Khan Say #AbScenePaltega

The strange thing that happened soon after the release of SRK’s abs workout video was; Salman Khan’s ‘fake abs’ video got permanently deleted. So, is this a sign of any insecurity? Or Salman Khan is coming up with real abs? It’s high time for Salman fans to agree that Shahrukh Khan has real 8 pack abs! Also Read - Sushant Singh Rajput Case: Muzaffarpur Court Orders Salman Khan, Karan Johar And 7 Others to Appear

Whatever may be the reason, the workout video has worked very well to amass some huge buzz for Shahrukh Khan, Deepika Padukone’s next Happy New Year. One of the awaited movie of the year is all set to release on Oct 24.