Sushant Singh Rajput Case: Shekhar Suman thanks Twitterati for the overwhelming response to the #justiceforSushantforum.

Actor Shekhar Suman, who said that there is a mystery behind Sushant Singh Rajput’s untimely demise, forms a hashtag #justiceforSushantforum on Twitter and gets positive responses on the same. On Wednesday, Shekhar tweeted thanking netizens for extending their support to the forum. “Thank you for the overwhelming response to the #justiceforSushantforum ..im in the process of working out the modalities and giving it a shape. plz don’t lose hope and be patient..i assure you that we will do our best to bring about a closure in his case.”Also Read - Sushant Singh Rajput's Fans Gather Outside Mannat to Show Support For Shah Rukh Khan as Aryan Khan Stays in Jail Till Wednesday

“Don’t let your anger die down..keep the movement going ..we will not spare the culprits even if we have to go to the end of this world. #justiceforSushantforum,” wrote Shekhar Suman in two separate tweets. Also Read - Aryan Khan Case Latest Update: Shekhar Suman, Vishal Dadlani Support Shah Rukh Khan, Say ‘Being Used as Smokescreen’ 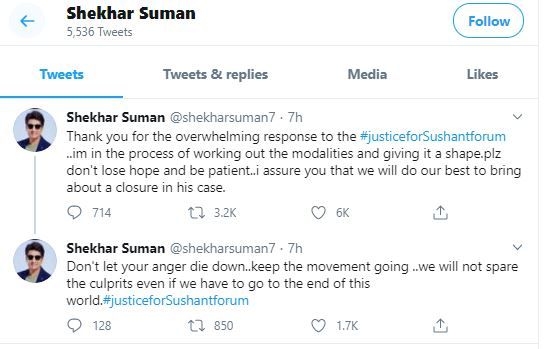 #JusticeforSushantforum is formed to demand Central Bureau of Investigation (CBI) probe into Sushant Singh Rajput’s death. On Tuesday, Shekhar Suman had announced the formation of his forum with a tweet where he wrote: “Im forming a Forum called #justiceforSushantforum where i implore just about ev one to pressurize the govt to launch a CBI inquiry into Sushant’s death,raise their voices against this kind of tyranny n gangism and tear down the mafias. I solicit your support.”

“It’s crystal clear,if presuming Sushant Singh committed suicide,the way he was,strong willed and intelligent, he would have definitely definitely left a suicide note. My heart tells me,like many others,there is more than meets the eye,” the actor mentioned in a separate tweet.

#justiceforSushantforum trended on twitter throughout Wednesday as netizens extended their support to the purpose of the forum. Netizens since last week have been demanding a CBI enquiry into the death of Sushant Singh Rajput. The hashtag #CBIEnquiryForSushant has been viral for over a week now.

“Truth should come out in the forefront, it’s a cold blooded murder giving a face of suicide. CBI investigation should be carried out and everyone involved in this should be behind the bars. JUSTICE delayed is JUSTICE denied. #justiceforSushantforum,” tweeted a user.

“#justiceforSushantforum..It’s been more than a week still we can’t get over his passing away. Do u know why? bcz he was not someone From a millionaire family, he was one of us a simple guy frm Bihar and dts y we can’t stop relating us to him. Now we want only justice for him,” wrote another user.

“This Bollywood Mafia people must be punished too. They not only tortured sushant but also did not come out to support his family after his death. No other punishment is bigger than we Stop watching Mafia’s movies. #justiceforSushantforum,” expressed another user.

Sushant Singh Rajput committed suicide on June 14 at the age of 34. The final postmortem report has been received by police and the cause of death has been cited as asphyxia due to hanging. Till now Mumbai Police have interrogated a total of 23 people including his family, staff, household worker, Mahesh Shetty, Ankita Lokhande, Rhea Chakraborty among others. As per the reports, the actor was suffering from clinical depression and has been receiving treatment for the same.