Internet sensation Shehnaaz Gill’s viral mashup ‘Twada Kutta Tommy, Sada Kutta Kutta’ created by popular music producer Yashraj Mukhate, is on the next level. Actors, singers, and now cricketers have started creating their very own version of ‘Sada Kutta Kutta’ and we cannot get over the videos. After Shakti Mohan, Raveena Tandon, now Indian cricketer Shikhar Dhawan is seen grooving to the famous Shehnaaz Gill mashup. In the video, Dhawan hilariously dances to the beats with his two dogs and captions the post as, “Tuawda kutta tommy Saada kutta kutta (with a few laughter emojis)”. The video has gone viral with over 4,00,000 views. Also Read - Viral Leopard Video From Himachal Captures 'Human Behaviour' 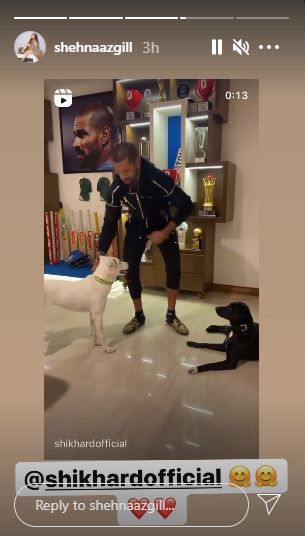 Shehnaaz Gill thanked the mashup creator Yashraj for the video. She wrote, “Overwhelmed with the creativity by each one of you! I’ll be posting some more reels! Can’t wait to see more reels on this super track recreated by @yashrajmukhate.” (sic).

Last week, Sada Kutta Kutta got famous American sitcom FRIENDS’ twist. A video-editor Ketan Prashant Bakshi created a rib-tickling edit of Shehnaaz’s ‘Sadda Kutta Kutta’ dialogue with visuals of FRIENDS. The visuals are of Chandler’s famous victory dances, the fight between Ross and Rachel, Joey’s as a drummer, and many other visuals of the six friends.

The video of Shehnaaz has been taken from her stills in the Bigg Boss 13 game where she was a participant.