Shilpa Shetty Kundra shared her thoughts after the Mumbai court granted bail to her husband Raj Kundra in the pornography case. Read her post.

Mumbai: Hours after her husband Raj Kundra was granted bail in the pornography case, actor Shilpa Shetty took to her social media to share an insightful thought that “beautiful things can happen after a bad storm.” Taking to her Instagram story, Shilpa shared a quotation that reads, “Rainbows exist to prove that beautiful things can happen after a bad storm.” This post from Shilpa came after the Mumbai court on Monday granted bail to her husband Raj Kundra in the pornography case on a surety of Rs 50,000. The court has also granted bail to Kundra’s associate Ryan Thorpe. He will also have to furnish a surety of Rs 50,000. “We had submitted (before the court) that the charge sheet in the case has been filed and hence, we are filing for bail now; which the court has granted,” informed Niranjan Mundargi, the advocate of Kundra.Also Read - Sherlyn Chopra Files Sexual Harassment Complaint Against Raj Kundra And Shilpa Shetty 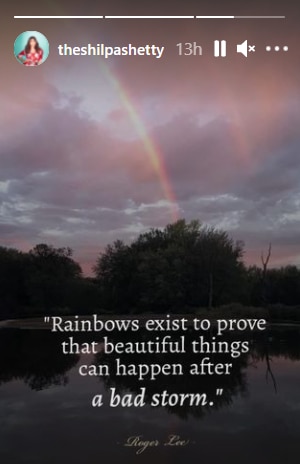 Soon afterwards, Kundra and Thorpe moved the Sessions Court for bail pointing out that since the chargesheet has been filed, it signalled an end to the police investigations. Moreover, arguing on grounds of parity, they contended that after the first charge sheet was filed against nine accused earlier, eight were already enlarged on bail. Kundra further stated that he was associated with the company which owned the apps HotShot and Bollyfame for only 10 months and remaining in jail exposed him to the risk of Covid-19 infection. Also Read - Bigg Boss 15: Shamita Shetty’s Jaw Drops After Salman Khan Jokes About Raj Kundra