Bigg Boss 11 is over and we are already talking about Bigg Boss 12 but the cat fight between winner Shilpa Shinde and Hina Khan is far from over. Hina and her boyfriend Rocky Jaiswal, slammed Shilpa on social media recently after she shared an adult video clip on her page. The actress’ aim was to tell the world that the MMS that was leaked last year, claiming that it was she in the compromising state in the video, was not her. However, this didn’t go down well with Hina or her beau who posted series of tweet to lash out at Shilpa for being so ignorant and careless and sharing a video without the consent of the woman in it. Also Read - Hina Khan Oozes Elegance in Lavender And Mint Green Salwar Kameez, See PICS

The Dhan Dhana Dhan TV show star however got a lot of support from her fans, who understood her plight and need to come out and clarify that it was not her in the leaked pornographic MMS. Now, there is a Shilpa Shinde fan who has threatened Hina Khan and posted a tweet saying that she has downloaded an MMS clip with Hina in it and she is planning to leak it. Not just that, she also planned everything well and said that she will release this along with the song Bhasudi/Bhasoodi and her aim is to make both the videos viral. Also Read - Bigg Boss 14 Highest Paid Contestants: Rubina Dilaik Earns The Maximum in Freshers, Sidharth Shukla in Seniors

Without wasting a moment, Rocky came to his lady love’s defense and said that she can do whatever she wants to with that clip and these things do not affect them or their lives. Shilpa however, reportedly asked the fan to not do that and delete the clip immediately. Also Read - Bigg Boss 14 October 21 Episode Major Highlights: Captaincy Task Breaks Friendships in The House

Shilpa also took to social media to post a message for all the women who have been victims of such incidents where their morphed/fake videos or pictures were created and circulated. Shilpa said, “My only request to everyone who become victim of disgraceful morphing, which is often done by few evil minded people. Raise ur voice against it that it’s not u. Your family and near & dear ones should also support u. Remember, hum darte Hain isiliye log aur darate Hain (sic).” 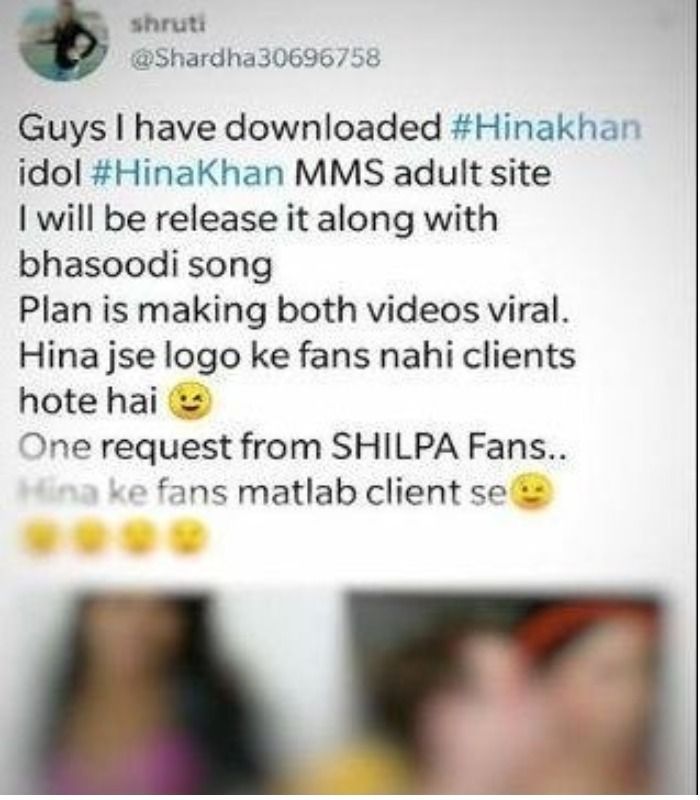 Yes to make your selves happy and illogically content your void, your Idols and their media handlers (back to life) are promoting hate/abuses/anarch just like it’s still BB11. There is no WKV to cover your filth anymore. And btw don’t lemme start on who wants promotions and how.

Earlier, ex- Bigg Boss contestant Vikas Gupta, who has had a love-hate relationship with Shilpa, was asked for his take on the whole issue but he maintained a very safe stand. Vikas said that whatever happened was unfortunate but he cannot take any sides. “Honestly, I wouldn’t like to give my take on this. Shilpa did what she had to. If I side her, Hina’s fans will attack me. If I side Hina, Shilpa’s fans will attack me. Either way, my fans will get embroiled, and within no time, our three accounts and our fan clubs will define a war zone,” Vikas told in a chat to Spotboye.

He also advised his fellow Bigg Boss 11 members that the game show was long over and it is time to move on in life.