Shruti Haasan And Boyfriend Michael Corsale All Set To Say Their ‘I Dos’?

Yet another celebrity wedding on the anvil?

Shruti Haasan might have chosen not to comment about her love life but the pictures doing the rounds every few months tell a different story. While she has been spotted with her London-based boyfriend Michael Corsale regularly, rumours got stronger when pictures of her father Kamal Haasan and Michael in London went viral. Speculations were that the actress had planned a meet between the two important men in her life, so as to seek approval from the father. Just a couple of days ago, we spotted the young couple with her mother Sarika in Mumbai. Also Read - Rajinkanth vs Kamal Haasan at Box Office After 16 Years? Watch Out This Diwali

It looks like, the lovely love-birds have the blessings of Shruti’s parents and they are no more skeptical about making it official. Just a few minutes ago, we saw the two – Shruti and Michael at Mumbai airport, flying out of the city. Is a London rendezvous in the offing? A London Christmas perhaps? Or just a vacation somewhere in India, considering that its December and the weather in most of the cities around the country is favourable for a holiday? We will know in time. Check out their pictures below: Also Read - Kamal Haasan Requests Voters To Expose Those Who Offer Money and Gifts For Votes 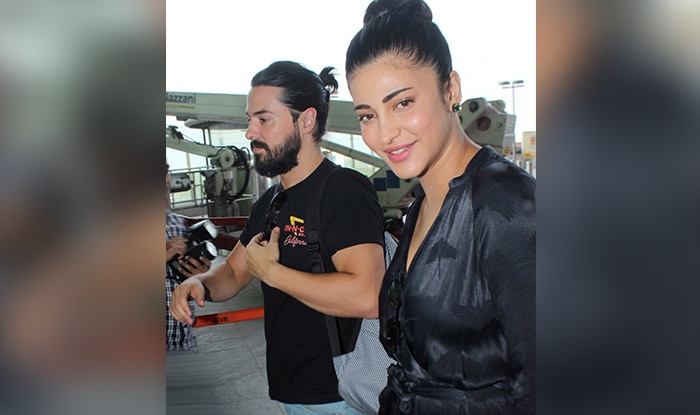 It can be recalled that Shruti has always pushed questions about her relationship under the carpet. In fact, she has been stern with the media and made it clear that she doesn’t want to talk about her personal life in public. However, with her stepping out into the open with her boyfriend in tow, it seems like the status is now changed. The actress certainly looks ready to let it all out there and let imaginations run wild. For all we know, we might hear wedding bells soon.