Media has their own obsession with celebrity kids, which many a time appear to be unaware of their own boundaries. Navya Nanda is one such celebrity kid, whose privacy bubble have been pricked by media on so many occasions, that her mother Shweta has lost count of it.

Shweta Nanda’s 19-year-old daughter Navya Naveli Nanda surfaces time and again in the news, for only reason that she comes from one of the most influential family of Bollywood. However, Navya is not a public figure, says mother Shweta Nanda in a heart-wrenching open letter she penned for DNA. Being a celebrity put ones personal life in a compromising situation a lot of times, and often does lot harm than what meets the eyes. Also Read - List of People NOT Invited to Varun Dhawan-Natasha Dalal's Wedding in Alibaug on Sunday

Media has their own obsession with celebrity kids, which many a time appear to be unaware of their own boundaries. Navya Nanda is one such celebrity kid, whose privacy bubble have been pricked by media on so many occasions, that her mother Shweta has lost count of it. This is has been happening to Navya since she was 13. Compelled to finally open about it, Shweta asks “She is generous and kind and bright, but these attributes don’t make fetching headlines! Do the adults who run these sites even know how invasive and inappropriate what they are doing, is? Do they even care?” Also Read - Deepika Padukone all Set For Her Second Hollywood Venture as She Signs With Talent Agency ICM

Here are few excerpts from what Shweta wrote on DNA: Also Read - Did Pathan Director Siddharth Anand Slap His Assistant On Set of The Film? Know The Truth Here

“This is why… You do not know my daughter, the websites that post her pictures with captions like ‘Navya Nanda HOT pics’ or ‘Navya Nanda parties with friends, WILD’! certainly do not know her either. Nor, might I add, do they have her permission to post her private pictures. She is not a public figure. Yes, she is related to some very famous people, but that is something completely out of her control.”

“If she finds herself on a beach, she will wear beach-appropriate attire — namely, a swimsuit — as would any young girl anywhere. If there is music, she will dance much like her peers would. She will pout, she will preen, she will hang out with boys — the last time I checked, absolutely normal teenage behaviour!”

“Most importantly all of her social media accounts are private and she is not on Twitter. So, it begs the question, how do her pictures land up all over the internet? Here is how. Websites with a keen interest in Bollywood and its goings-on, make fake identities (mostly in the names of her friends) and send requests to anyone following her and often to her as well. They then plunder the accounts of her friends and use their photos to post on their websites captioning them irresponsibly and disrespectfully, most of them stop short of objectifying and shaming her. This has been happening with my daughter since she was 13 years old!!”

“Navya has a strong sense of self, so perhaps, it does not hurt her as much when in the comments section, people judge her, deride her, call her unattractive or scrawny. But you can well imagine what it would do to the self-esteem of a young, impressionable girl, who hasn’t asked to be thrust into the spotlight in this way. She is somebody’s child, a most treasured and beloved child. As a parent, I sit helpless. Unable to plug the flow of this filth that is distributed in the name of information and journalism, and all in the pursuit of hits and likes, leading to some kind of monetisation. In effect, they profit off pictures stolen from my daughter’s life. If there is rock- bottom, this would be it.”

(ALSO READ: Shah Rukh Khan reveals how he felt his stardom was the reason why Suhana’s bikini-clad photo went viral) 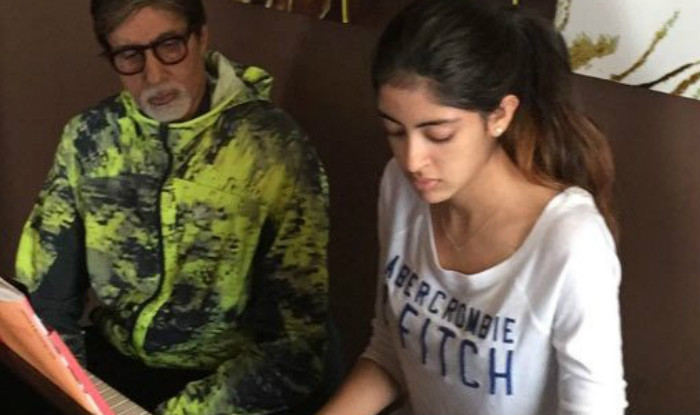 “She doesn’t have to hide, she isn’t doing anything wrong. Her parents and her family are absolutely okay with what she wears and does.”

Shweta concluded asking a hard-hitting question to media, if her daughter Navya Nanda can have her private life back?

Earlier, Bollywood actor Shah Rukh Khan also had to confront media after pictures of his daughter Suhana floated over internet and media has it’s field day over it. Shah Rukh Khan reached 0ut to media houses asking them to take down in order to contain the situation. Later in an interview Shah Rukh said, his daughter had to go through this while she is still not a public figure, because of his own celebrity status.

Guess, it’s time people understand where to draw the line.