Sidharth Malhotra’s Aiyaary To Clash With Padmaavat But Not Akshay Kumar’s Padman?

One more shift in date for Aiyaary?

When will all this confusion end? The delay in Padmaavat release date has sent schedules of various Bollywood releases all haywire. Sidharth Malhotra’s Aiyaary, which was initially slated for January 26th release date, pushed it date to February 9 after Padmaavat and Padman locked the Republic Day weekend as their release date. Now, after Akshay Kumar deciding to shift Padman to Feb 9, the makers of Aiyaary are looking to bring back their film to the original release date.Also Read - The Kapil Sharma Show: Akshay Kumar Becomes First Guest To Appear On New Season of Comedy Show

Word abuzz in the industry states that an official announcement will be made soon about Sidharth Malhotra – Manoj Bajpayee’s film’s new release date. You may find it strange how the film is all okay about clashing with Padmaavat (which is a bigger film comparatively) and not with Padman. But giving an insight into this, trade analyst had tweeted last night, “Aiyaary has a patriotic subject to go with Republic Day.” The senior film critic deleted his tweet later but fans are now looking forward to an official word from the cast or producers of Aiyaary. Also Read - Top OTT Releases in August 2021: From Dial 100, Bhuj to Modern Love Season 2 | Watch Video Now 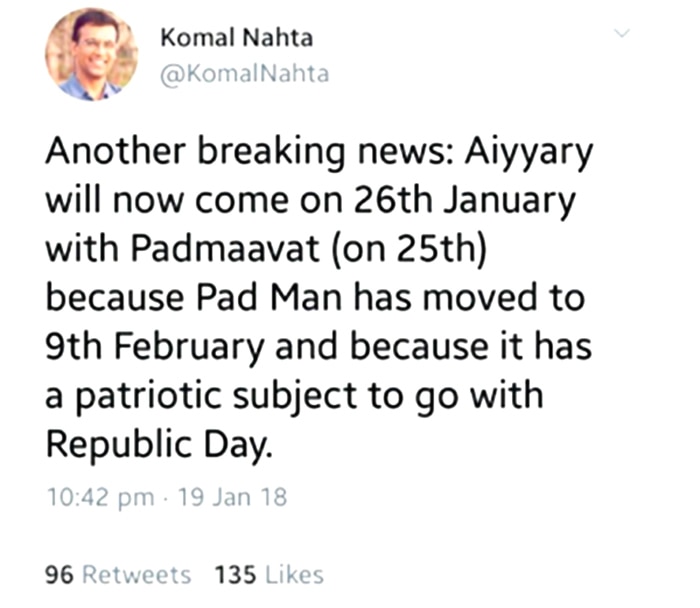 Another reason why Aiyaary is ready to take on Padmaavat could be because it is a long weekend and the Sanjay Leela Bhansali film may not release or see limited release in some states owing to the ongoing threats by Karni Sena. We already told you how distributors in Rajasthan are not buying the screening rights to Padmaavat due to the controversies around it. This may further benefit Aiyaary. India.com tried to contact the trade analyst and Aiyaary’s team but they weren’t available to comment.