Jannat" fame Sonal Chauhan, who was last seen in Telugu actioner "Legend", says the success of the movie has reserved her a berth in Telugu filmdom and has proved to be a springboad for her career. 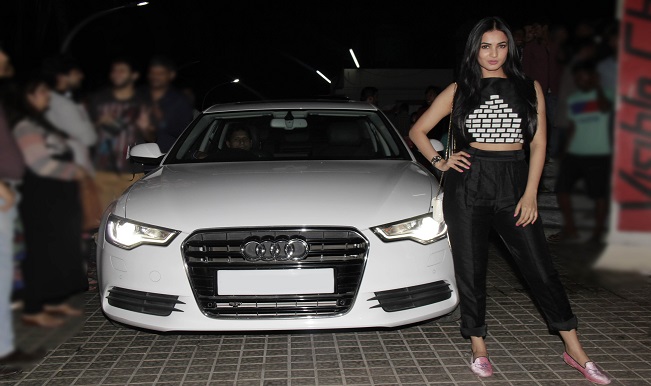 Chennai, May 26: “Jannat” fame Sonal Chauhan, who was last seen in Telugu actioner “Legend”, says the success of the movie has reserved her a berth in Telugu filmdom and has proved to be a springboad for her career. Recently, Nandamuri Balakrishna-starrer “Legend” completed a 400-day run in theatres. It turned out to be biggest Telugu hit in recent times. “I feel fantastic to be basking in this success. It also feels surreal and the love Telugu audiences have shown me is beyond my imagination. I just don’t have words to explain how I feel but I can confidently say that this success has taken my career to new heights,” Sonal told IANS. (Also read: Lakme Fashion Week 2014 Day 2: Sonal Chauhan walks the ramp for designer Purvi Doshi) Also Read - 3 Times When Sachin Tendulkar Turned The Match With His Bowling | Watch Videos

“Even before the release of ‘Legend’, I was offered several projects. But I waited for something exciting to come along. Eventually, I signed ‘Pandaga Chesko’ because it gave me an opportunity to try something I haven’t done before in my career,” she said. Sonal is wary of the growing expectations and she admits that with the success of “Legend”, it has increased manifold. “Expectation level changes with each film. It also changes depending on the actor you’re paired with. If audiences expected something from me while working with Balakrishna; it changed when I worked with Ram Pothineni in ;Pandaga Chesko’,a she said. Also Read - BB3 Starrer Nandamuri Balakrishna Gets a Release Date, to Clash With Ravi Teja’s Khiladi

She says high expectations are good as it pushes an actor to work extra hard and deliver what’s expected from him or her. Sonal says she chose “Pandaga Chesko” very cautiously as she plays a role many would consider risky. “I’m playing a very competitive businesswoman who competes with Ram. This role comes with some degree of risk and many actresses I know would hesitate to even take it up. It’s healthy to take risks as it allows you to understand what works and what doesn’t,” she said.

Sonal added that an actor’s career would get boring without risks. Talking about her co-star Ram in “Pandaga Chesko”, she said: “It was fantastic working with him. He’s very friendly and supportive. I’ve worked with actors from different age groups and I’ve learnt something important from all of them.” A crucial portion of “Pandaga Chesko” was shot in Portugal, and Sonal considers the place “heaven on Earth”. “We shot in this exotic place which is six hours away from Portugal. It was so beautiful and serene. I haven’t seen anything so beautiful in my life,” she added.

Sonal is currently busy shooting for Telugu projects “Sher” and “Size Zero”. “Both the projects are shaping up well. I’m juggling between the sets of these films. It’s hectic but I’m liking the momentum at which my career is heading in the right direction,” she said.