Sonam Kapoor and Anand Ahuja jet off to London on Monday. Is Coronavirus the main reason? Find out here.

Actor Sonam Kapoor and her husband Anand Ahuja have flown from Mumbai to London recently. Just, like every wife, Sonam also wants to do the best for her family so that the invisible killer i.e. coronavirus should stay away from them. She took to Instagram stories to share a series of travel posts where she was taking selfies with Anand. Also Read - Sonam Kapoor Shares Her PCOS Diet and How She Stays Energised On Long Days

Sonam Kapoor’s recent Instagram posts reveal that she is in London. Sharing a view of London from the plane, Sonam wrote: “London I am back. So beautiful.” Also Read - Sonam Kapoor's Cousin Priya Singh Files FIR Against Caretakers For Beating up Handicapped Dogs at Her Shelter 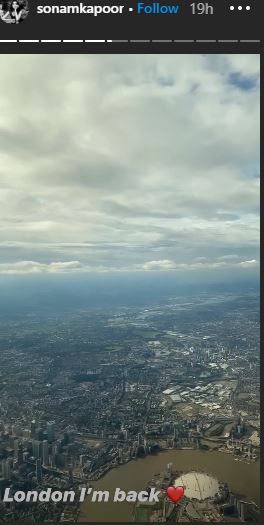 Earlier, Sonam along with her husband Anand Ahuja had flown from London to Delhi at her in-laws’ residence to be with his family, and after a three-month stay in Delhi, Sonam flew to Mumbai to be with Kapoor family ahead of her birthday.

For the unversed, Sonam and Anand got married in a traditional Sikh ceremony in Mumbai on May 8, 2018.

On the work front, Sonam has entertained us with films such as Delhi 6, Raanjhana, Neerja, Padman, Veere Di Wedding among others. She was last seen in The Zoya Factor, which also featured Malayalam star Dulquer Salmaan. The film, which is an adaptation of a book of the same name written by Anuja Chauhan, fared below expectations.