Sonam's idea is surely going to be imitated.

Sonam Kapoor is now Sonam Kapoor Ahuja. The actress got married to her businessman boyfriend Anand Ahuja in a dreamy wedding affair which was followed by a star-studded reception. The Veere Di Wedding actress’s big day was one of the most talked about topics this year. And now we have heard interesting details of Sonam’s wedding ring and mangalsutra. We are sure after finding out about the mangalsutra, you would definitely want to do something similar. Also Read - Sonam Kapoor’s Birthday Wish For Swaru: 'Can't Wait to Celebrate Once This is Over'

According to reports, the diamond ring that Anand Ahuja gifted Sonam Kapoor on her wedding costs Rs 90 lakh. Sonam customised her mangalsutra according to her and Anand’s sun sign. It has a solitaire in the centre and has Gemini on one side and Leo on the other side of the solitaire. Take a look at the picture below: We are sure this is going to be the latest trend soon. Also Read - After Anushka Sharma, Sonam Kapoor Turns Hair Stylist For Anand Ahuja During Quarantine- Watch 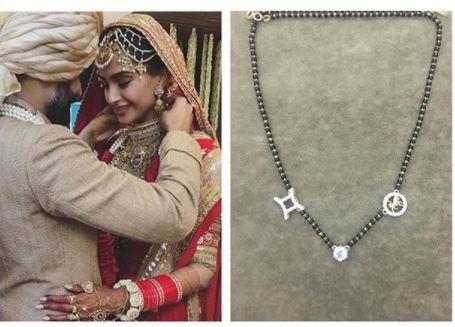 After tying the knot to Anand Ahuja, Sonam walked the red carpet at the prestigious Cannes Film Festival yesterday and day before. On both the days, the fashionista slayed at the red carpet with her sartorial choices. On the first day, the actress wore a cream Ralph and Russo creation and on Day 2, the diva redefined elegance as she stepped out in a nude gown by Vera Wang. Like always, the actress’s makeup and accessories were on point.