South Actor Shraddha Srinath Takes Sarcastic Jibe at Varun Dhawan-Natasha Dalal’s Wedding: ‘His Wife, In-Laws Will Not Be Okay With Him Acting’

Shraddha Srinath takes a jibe at the patriarchy that exists in the industry by wishing Varun Dhawan-Natasha Dalal sarcastically on their wedding.

Popular Kannada actor Shraddha Srinath who was seen in Jersey, Maara and Milan Talkies, recently took a sarcastic dig at newly wedded couple Varun Dhawan and Natasha Dalal. While the whole industry is wishing and sending blessings to the lovebirds for a blissful marriage, Shraddha shared a picture from Varun-Natasha’s wedding and posted a sarcastic note before congratulating them. Shraddha Srinath wrote: “Another good actor bites the dust. Sad that we will not see him on screen again. Obviously, his wife and in laws will not be okay with him acting with other heroines. Maybe he will switch to doing male-oriented films? But how to balance personal life and work-life ya. Tough. Will miss him. Congratulations though, Varun. (sic).” Srinath took a jibe at the patriarchy that exists in the industry.Also Read - Varun Dhawan- Natasha Dalal Turn One, Actor Shares Unseen Mesmerising Wedding Pictures

Shraddha’s post has gone viral ever since the upload. Even netizens shared her Instagram story as it raised several eyebrows. Also Read - Varun Dhawan’s Driver Manoj Sahu Dies on Duty Due to Heart Attack

Take a look at the post shared by Shraddha Srinath: 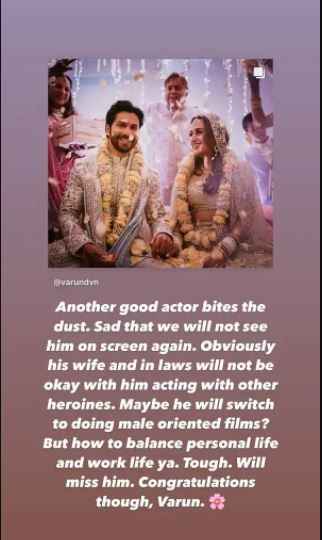 In another post, Srinath mentioned that it was not a joke and also don’t take the post as one. She subtly highlighted the fact that in numerous cases, female actors had to stop taking roles in movies that involved acting with other male actors after marriage due to pressure from their family, so why cannot male actor get the same situation. 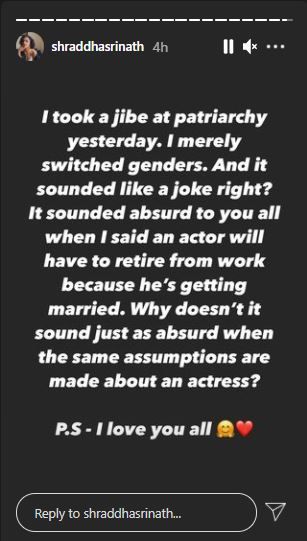 On the work front, Shraddha was seen in Maara alongside R Madhavan. Maara is a remake of a Malayalam film, Charlie.

Varun and Natasha took wedding vows on January 24, 2021, at Alibaug’s The Mansion House. The couple has reached Mumbai in a ferry boat from the venue. It has been reported that the couple and their families will host a reception on February 2, 2021 in Mumbai for their industry friends.