Watch the video of Shah Rukh Khan's car BMW i8 being attacked by a beggar! 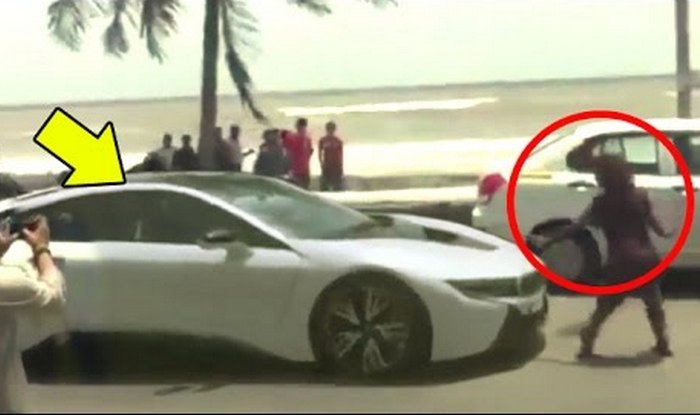 Bollywood superstar Shah Rukh Khan was spotted driving his brand new BMW i8 car in Bandra, Mumbai, very close to his home in the western suburbs. Many fans took pictures of his swanky new white car that has a futuristic design. The photos went viral on social media. But not many fans know that as Shah Rukh was driving down the beach promenade on Bandstand, he was attacked by a person who seemed to be a beggar. Also Read - Did Pathan Director Siddharth Anand Slap His Assistant On Set of The Film? Know The Truth Here

It could well have been a fan gone mad or even a person who just hates the rich and their fast cars. We don’t think the attacker even knew that the person in the car was superstar Shah Rukh Khan! Also Read - Varun Dhawan-Natasha Dalal Wedding Guest List: Shah Rukh Khan, Salman Khan, Karan Johar To Be in Attendance

Shah Rukh is known to buy fancy cars like the Mercedes, Audi and Beamer. He also has a fancy vanity van that was infamous for being parked in the lane beside his house Mannat at Landsend, apparently a ramp for which was built without permission.

We would just say, Shah Rukh Khan Bhai, please be careful while driving your expensive cars in broad daylight in a crowded city like Mumbai! Or simply drive them in the night, like cricketer Sachin Tendulkar did with his Ferrari!

Watch the video of Shah Rukh Khan’s car BMW i8 being attacked by a beggar! (Photo and video courtesy of Movie Talkies.)