“Ha ha look who is talking about dirty politics. How your father got CM seat is a case study of dirty politics, sir… Forget all that, ask your father to answer a few questions related to SSR death: Also Read - Bollywood Drugs Case: 25 NCB Officials Test Positive, Under Home Quarantine

1) Where is Rhea? Also Read - YouTuber Arrested For Posting Abusive Content Against Women, Kangana Ranaut Demands His Release Saying 'What is This Gunda Raaj?'

3) When a complaint was made about SSR’s life being in danger in the month of February, why Mumbai Police called it a suicide on day one?

4) Why don’t we have forensic experts or SSR phone data who all called and spoke to him during the week of his murder?

5) Why IPS Vinay Tiwari is locked up in the name of quarantine?

6) Why being fearful of CBI?

7) Why Rhea and her family looted Sushant money?

These questions have nothing to do with politics please answer these.” 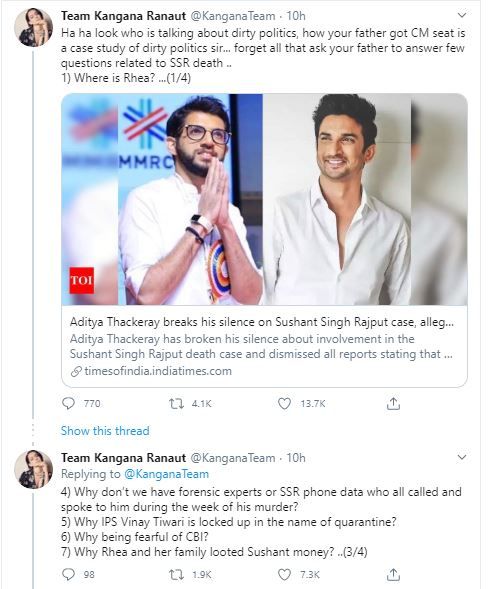 Aditya Thackeray issued a statement rubbishing all false reports linking him with the SSR death case. He had mentioned in his post that personal remarks were made against him and the Thackeray family and people started dirty politics. In the note, he wrote, “Hence they started this dirty politics over Sushant Singh Rajput’s case. Using someone’s death for political gains is inhumane. Cine industry aka Bollywood is an important part of Mumbai. As the grandson of Hinduruday Samrat Balasaheb Thackeray, I would like to clarify that I won’t get involved in any such matter which will drag down the dignity of Maharashtra, Shiv Sena and the Thackeray family.”