Sunil Grover failed to judge the sensitivity of the matter and ended up upsetting many Twitter users with his 'Happy Dhanteras tweet' mentioning 'PMC bank customers.'

Actor and comedian Sunil Grover had to face the ire of the people on social media for posting a tweet that mocked PMC account holders. Sunil might have had positive intentions behind the tweet but his post came out as insensitive and several users slammed the Bharat-actor for making a joke in a bad taste. Realising the sensitivity of the matter, Sunil deleted the tweet within a few minutes.Also Read - Is Sunil Grover Back in Kapil Sharma Show? Decode This Cryptic Tweet

The actor wished the festival of Dhanteras to his fans and wrote, “Happy Dhanteras to all! (Even to PMC account holders)” (sic). This upset many people on social media who schooled Sunil for not sensing the emotions of those who have been affected by the bank this festive season. One user wrote, “Sir do you have an account over there or you are enjoying the situation like a festival?” while another wrote, “That’s rude and insulting”. Check out the screenshot of Sunil’s tweet here: Also Read - From no One to Gutthi, Sunil Grover's Struggle Story is so Inspiring it Will Bring Tears to Your Eyes 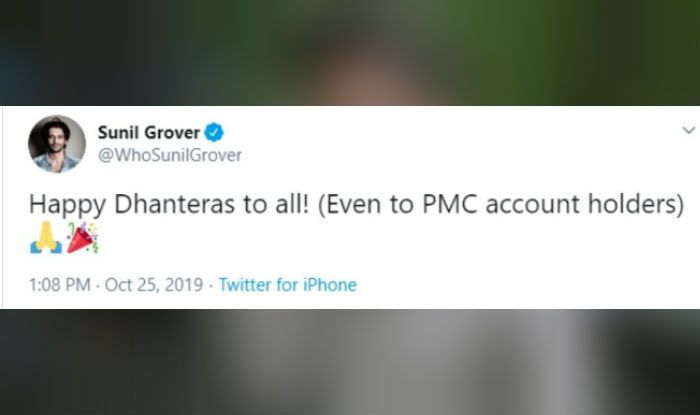 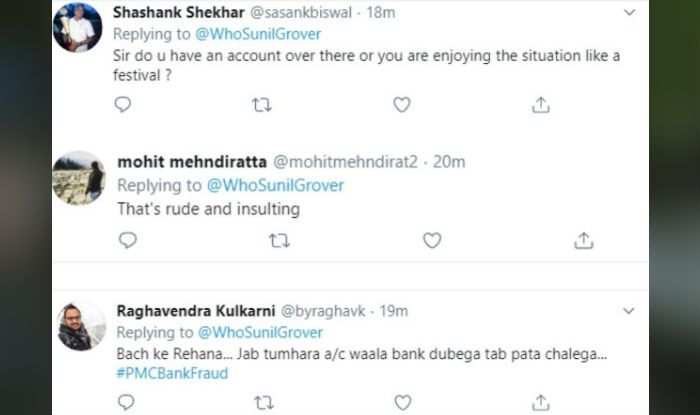 Sunil Grover is one of the most loved comedians in the country and his performances are often reverred by the audience. The actor finds a celebratory status in the media and his fan-following is in million on social media. With so much love comes a lot of responsibilities and a star is expected to fulfill these responsibilities.

Meanwhile, the Reserve Bank of India had restricted the activities of the Punjab and Maharashtra Cooperative Bank for the next six months following an alleged fraud of Rs 4,355 crore in the bank’s name. The RBI also asked the bank to not grant pr renew any new loans, make any investment or incur any new liability. The current withdrawal limit for a bank customer is Rs 40,000 with an additional Rs 50,000 in case of a medical or educational emergency after following a set process.