Sushant Singh Rajput's unseen pic from the sets of Dil Bechara will remind you of the late actor.

Bollywood actor Sanjana Sanghi, who is all set to make her Bollywood debut opposite late actor Sushant Singh Rajput in Dil Bechara, has shared an unseen picture of Sushant from the sets of their upcoming film. She remembered the shooting days of the film and wrote “Just discovered this photo that I have never seen before myself. Breathing and living in memories and nostalgia. Our days of shoot filled with creative satisfaction and endless laughter on set. They both are making fun of something I did or said…which was a constant everyday phenomena” in her Instagram post.Also Read - Rolex Rings IPO: Check Subscription Status, Key Details

Taking to Instagram Stories, Sanjana Sangi posted the pic in which Sushant is seen sharing a happy moment, seated on a bike while Sanjana is seen sitting beside him in a side seat and the film’s director Mukesh Chhabra is seen standing beside her. Also Read - VIDEO: When Rahul Chahar Gave Wanindu Hasaranga a Fiery Send-Off! 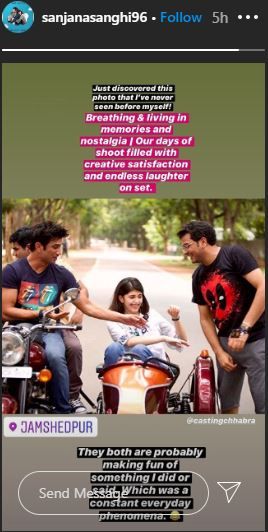 Sushant Singh Rajput died by suicide on June 14, Sunday morning. He was found hanging in his Bandra residence by his house help. As per the police, the postmortem report suggests that he committed suicide at around 10:30 am. Till now, approx. 30 people have been interrogated in the Sushant’s suicide case. The post-mortem report of the late actor revealed that he died due to asphyxia, suffocation, because of hanging and his viscera reports were negative- no chemicals or poison found.

Sanghi worked with late actor Sushant Singh Rajput in his last film Dil Bechara which is an adaptation of famous John Green novel The Fault in Our Stars. The film will release on digital platform Disney+ Hotstar on July 24.

The film marks the debut of Sanjana and the last film of Sushant.