Sushant Singh Rajput Death Case Latest News: The Mumbai Police shared a press release stating that there was information from Sushant's father and no written complaint was filed.

Actor Sushant Singh Rajput’s father KK Singh recently claimed that the Mumbai Police were warned about the threat to the late actor’s life in February 2020. In the self-made video, Sushant’s father was quoted by the news agency ANI, “On Feb 25, I informed Bandra Police that he’s in danger. He died on June 14 & I asked them to act against people named in my Feb 25 complaint. No action was taken even 40 days after his death. So I filed FIR in Patna.” Also Read - Bollywood Drug Racket: Rakul Preet Singh Confesses Chats With Rhea Chakraborty, Denies Consuming Drugs

A few hours after that, the Mumbai Police counterclaimed KK Singh saying that no written complaint was filed by the family of late actor Sushant Singh Rajput in February this year. The statement reads: “Regarding Sh Sushant Singh Rajput Accidental Death, the case has been registered to vide A.D.No 43/2020 u/s 174 CrPC on 14th June, 2020. The matter is being investigated by Bandra Police Station Mumbai.” Also Read - SSR's Family Lawyer Says AIIMS Doctor Told Me It’s 200% Death by Strangulation; Doctor Denies

“Today, Sh KK Singh, Father of late Sh Sushant Singh Rajput has released a statement saying that the family had made a written complaint to Bandra Police on February 25. It must be clarified that no such written complaint has been addressed to Bandra Police Station on that date.” Also Read - Sushant Singh Rajput’s Ex-Talent Manager Jaya Saha Names Four Male Actors in Bollywood Drug Scandal

Sushant’s family released WhatsApp chats sent to Mumbai Police informing them that the actor’s life was in danger. The DCP Operations Shahaji Umap concluded, “However, one Shri. OP Singh IPS, the brother in law of late Sushant Singh Rajput, had sent some whatsapp messages to the then DCP Zone 9 regarding this matter. The then DCP Zone 9 had called Sh OP Singh and requested him that a written complaint is mandatory for any enquiry or action. However, Mr Singh wanted this to be resolved informally, to which the then DCP Zone 9 clearly told him that it was not possible’. 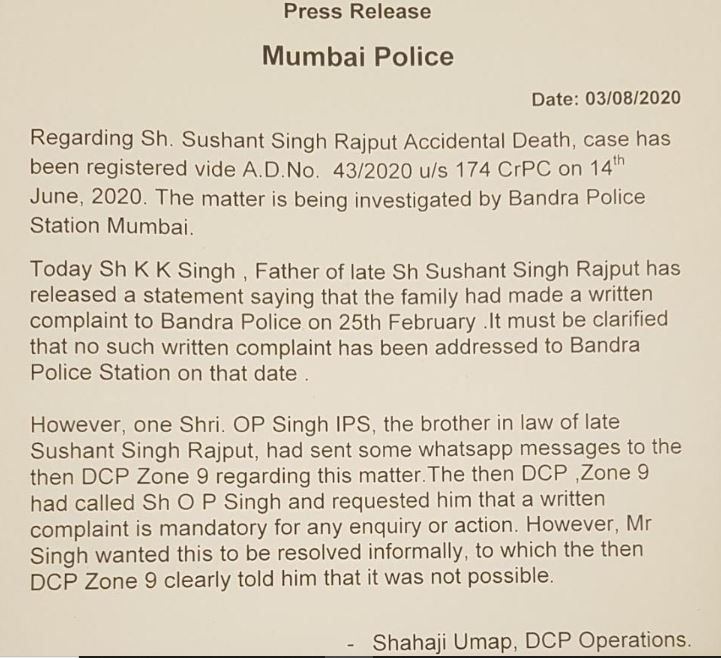 Earlier, Sushant Singh Rajput’s father’s lawyer, Vikas Singh said in a TV interview that the family told Bandra Police about their concern that the actor was surrounded by people ‘they didn’t trust’. He said, “What has been most distressful for the family is that what was Mumbai Police doing all this while? The family has been saying as early as 24 February 2020, when Sushant was still alive that he was surrounded by people whom they don’t trust and there could be some danger to him. And then when he died, the family says that please look into the people who were controlling him. No investigation against Rhea was started, she was given a clean chit.”