Actor Sushant Singh Rajput’s demise on June 14 has taken a political turn in India as there are a number of political parties backing the late actor family’s demand for a CBI probe into his suicide case. Social media accounts of fans are filled with justice tweets as they are relentlessly expressing their rage over Bollywood’s hypocrisy and nepotism. There are a few hashtags which are trending such as #WhyDelayInCBIForSSR, #PMModiCBIForSSR, #CBIMustForSushant, #CBIForSonOfBihar on social media.Also Read - Subramanian Swamy Changes Twitter Bio After Being Dropped From BJP's National Executive

Mumbai police are working on the case and interrogating almost everyone who were close to him. We came to know Bihar’s Jan Adhikar Party president Pappu Yadav recently tweeted a letter sent to him by Home Minister Amit Shah on his demand for a Central Bureau of Investigation (CBI) inquiry into the death of actor Sushant Singh Rajput. Also Read - Pappu Yadav, At The Forefront in Fight Against Covid, Sent To 14-Day Judicial Custody

In the letter, Amit Shah has acknowledged Pappu Yadav’s request for seeking CBI inquiry to the concerned ministry. Yadav’s request was received on June 16, 2020, and the action was taken on July 9, 2020. Also Read - JAP Chief Pappu Yadav Arrested For Allegedly Violating COVID-19 Protocols

“Amit Shah ji, if you want, you can initiate a CBI inquiry into Sushant’s case in a minute. Do not avoid it! A letter was sent to the Union Home Minister seeking a CBI inquiry into the suspicious death of film actor Sushant Singh Rajput, the pride of Bihar. He has forwarded the letter to the concerned ministry for action,” Yadav tweeted. 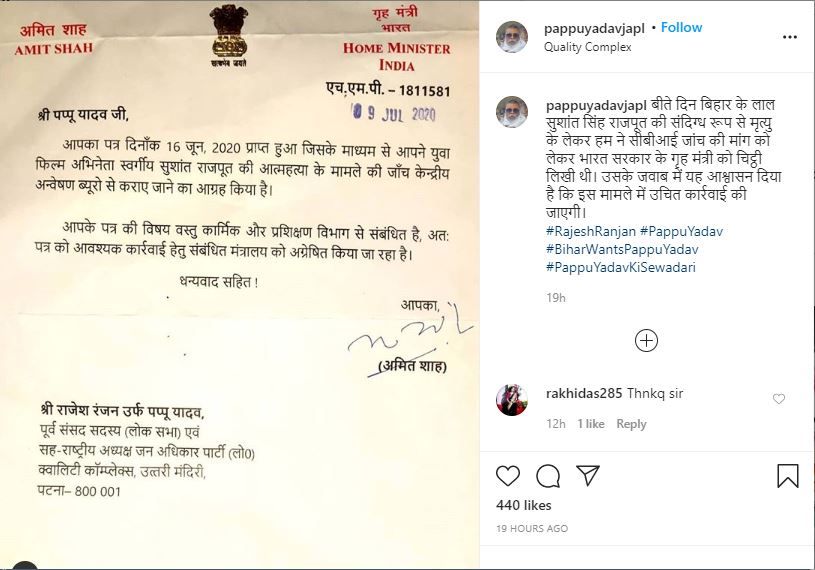 BJP MP, Dr Subramanian Swamy has also written a letter to Prime Minister Narendra Modi, urging a CBI inquiry for the Sushant Singh Rajput case. His letter read, “You are well aware, I am sure, of the untimely death of film actor MR Sushant Singh Rajput. My associate in law, Mr. Ishkaran Bhandari has done research on the circumstances of his alleged suicide that he is said to have committed. Although the police are still investigating the circumstances after registering an FIR, I learn from my sources in Mumbai that many big names in the Bollywood film world with links to don in Dubai are seeking to ensure a cover-up is carried outbid the police so that voluntarily suicide is conducted as the reason for the demise of Mr Rajput.”