Sushant Singh Rajput would have turned a year older on January 21. His sister urged fans to selflessly help 3 people and pray for his soul.

Sushant Singh Rajput’s Upcoming Birth Anniversary: Late actor Sushant Singh Rajput would have turned a year older on January 21. On his upcoming birth anniversary, his sister Shweta Singh Kirti has urged fans of her brother, to celebrate his life and spread love. “How should we celebrate Bhai’s birthday, it is on 21st Jan… Any Suggestions… #SushantBirthdayCelebration,” she wrote late on Wednesday. In the second tweet, she continued: “And I would love to see more people performing on his songs and posting it on social media. Let’s celebrate his life and help spread love and joy. #SushantBirthdayCelebration.”Also Read - Sushant Singh Rajput's Sister Shares a Truly Emotional Video on His 36th Birth Anniversary

“How about selflessly helping 3 people on Sushant’s Birthday and Praying for his Soul. We can even have 15 mins Global Meditation Session organized on his Birthday,” she concluded in the third tweet. Also Read - On Sushant Singh Rajput’s Birth Anniversary, Rhea Chakraborty Shares Unseen Video of Them Goofing Around in Gym- Watch 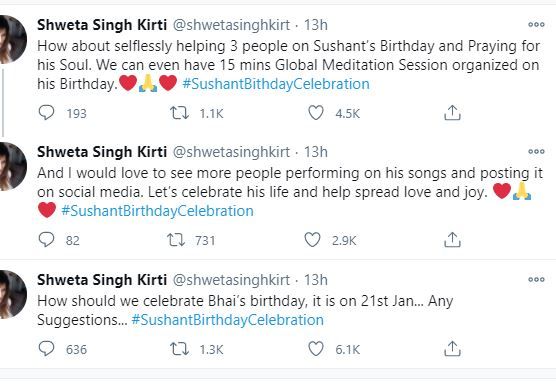 Also Read - Sushant Singh Rajput Birth Anniversary: Chhichhore To Kedarnath, Top 5 Remarkable Films Of Sushant That You Should Definitely Give A Watch

Sushant was found dead on June 14 in his Mumbai flat last year. On Wednesday, the late actor’s US-based sister had shared a note written by Sushant, where he admitted he got the game wrong after spending 30 years of his life. “Written by Bhai…the thought so profound #ForeverSushant,” she wrote while sharing the note. Sushant’s note read: “I think I spent 30 years of my life, the first 30, trying to become something. I wanted to become good at things, I wanted to become good at tennis and school & grades. And everything I viewed in that perspective, I am not okay the way I am but if I got good at things…. I realised I had the game wrong, because the GAME was always to find out what I already was!”

SSR death case is being investigated by the ED, CBI and NCB. The family and friends of the late actor demands justice for him.