Sushant Singh Rajput’s former manager Disha Salian’s father, Satish Salian, has written a letter to Mumbai Police alleging harassment and atrocity by the media on his family. He has also said that the news about his daughter;’s involvement with any politician or attending parties with big names of the film industry, rape and murder are all ‘stories cooked by these media’ and requested the police to ‘take reasonable action’ against the concerned journalists. Also Read - Sushant Singh Rajput Death Case: ED Grills Actor's House Manager Samuel Miranda in Money Laundering Case

The letter further reads, “Sir, I am writing this to you as my family has been continuously harassed by journalists and media people in relation to the death of my daughter Disha Salian. In light of the above unfortunate incident and circumstances, I had already submitted a written complaint in Malvani Police Station & ACP’s office vide letter dated: 13/07/2020 against derogatory posts and forwards being shared by the listed people in the said letter, leading to defamation of my deceased daughter and my family. In addition to the said letter, I would like to bring to your attention, the atrocities of journalists and media people on my family.” Also Read - Sushant Singh Rajput Case: CBI Receives DoPT Notification For Probe Into The Matter 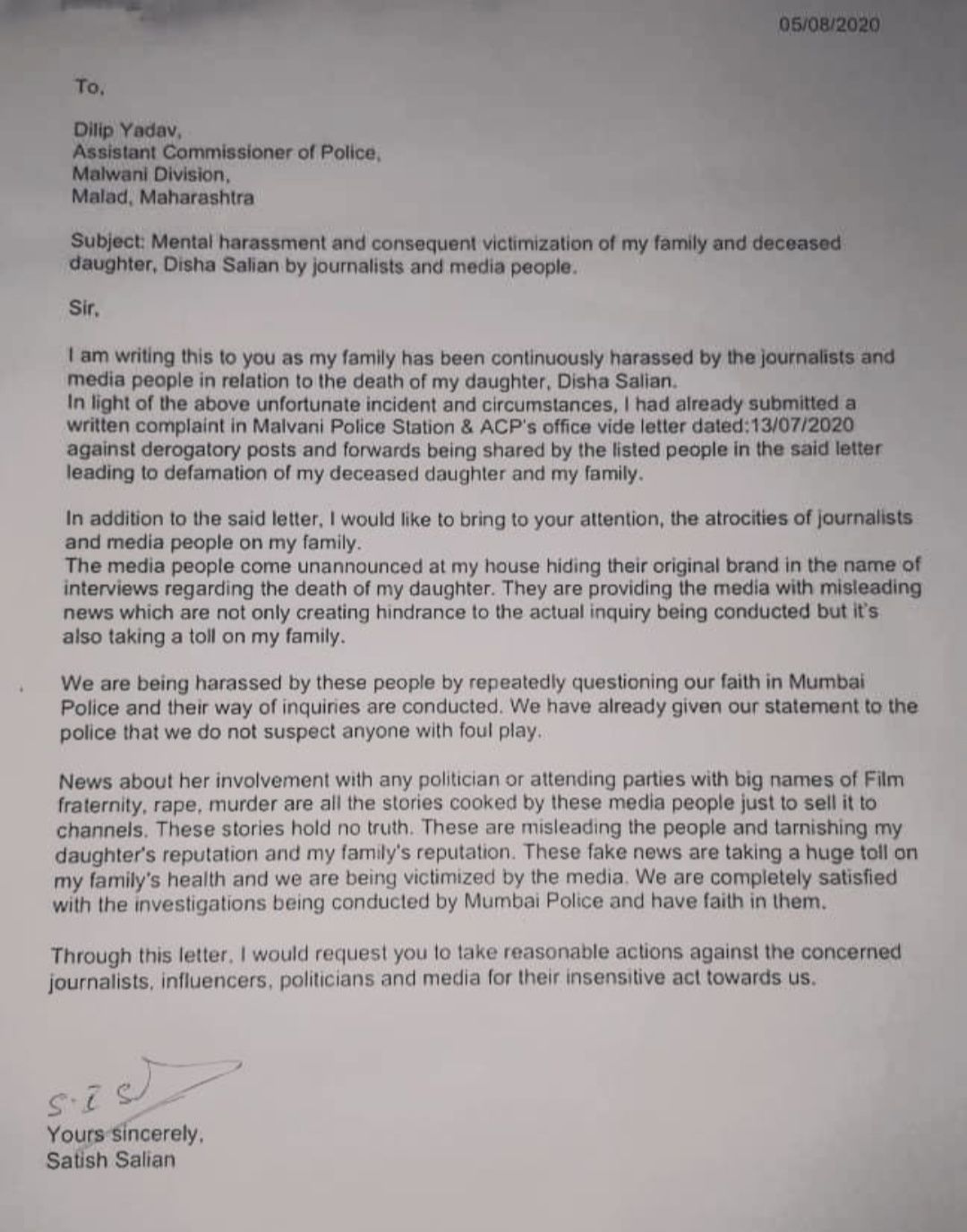 “The media people come unannounced at my house hiding their original brand in the name of interviews regarding the death of my daughter. They are providing the media with misleading news which are not only creating hindrance to the actual inquiry being conducted, but it’s also taking a toll on my family. We are being harassed by these people by repeatedly questioning our faith in Mumbai Police and their way of inquiries are conducted. We have already given our statement to the police that we do not suspect anyone of foul play. News about her involvement with any politician or attending parties with big names of film fraternity, rape, murder are all the stories cooked by these media people just to sell it to channels. These stories hold no truth. These are misleading the people and tarnishing my daughter’s reputation and my family’s reputation. These fake news are taking a huge toll on my family’s health and we are being victimized by the media. We are completely satisfied with the investigations being conducted by the Mumbai Police and have faith in them.”

The letter further reads, “Through this letter. I would request you to take reasonable action against the concerned journalists, influencers, politicians and media for their insensitive act towards us.”