Swara Bhasker's 'mood at 5 am' resonates well with half the millennials on Twitter, the other side indulge in cringe-worthy backlash

Braving the wrath of trolls once again on Sunday morning, Sheer-Qorma star Swara Bhasker shared a picture which did not go down well with one side of Twitter and Instagram while the other half could not stop gushing over her “bravery.” From drawing fans’ attention back to the “communication lockdown” in Kashmir for over 200 days to the current Delhi violence over the controversial CAA-NRC bill, Swara has unapologetically maintained her leftist stand which has often landed her on the abusive side of the trolls. Also Read - Nia Sharma Grooves to Cardi B's Song 'Up' As She Looks Hot in Little Pink Dress | Watch Viral Video

Taking to her social media handle recently, Swara shared a picture featuring her dressed in ethnic wear and hiding her smile behind a frame that carried a quote by David Burge. It read, “I can’t wait until dissent is patriotic again.” Sparking a series of mixed reactions on Twitter and Instagram alike, Swara was once again seen at the surfing criticism as she captioned the picture, “Mood. At 5am. #justsaying (sic).” Also Read - Delhi Reports 8,521 Fresh COVID-19 Cases, 5,032 Recoveries in Last 24 Hours; Schools Shut Till Further Notice

Mood. At 5am. #justsaying

Pouring out compliments and snide remarks as per their intellect, the Twitterati and Instagrammers flooded her post making it go viral instantly. While one user commented, “More power to you for fighting the modern fascist party (sic)”, another wrote, “Dissent is not the issue but instigating Violence is. Videos have been seen by all. Hope INDIANS do the needful to make Ur going to be released FILM becomes an economic Disaster like Dipika Padukone FILM. Money does not have Religion & hurts hardest when HIT. (sic)” and yet another shared, “Swara…u are so brave ..it has become so difficult for celebrities to talk against wrong(which our government is doing) now-a-days …salute to you.. (sic).” 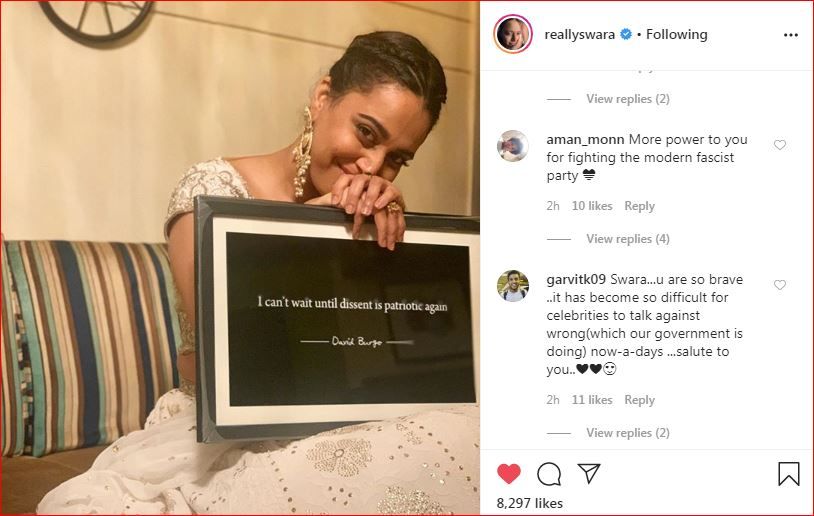 #ArrestSwaraBhaskar for being hot, feisty and smart [even if I disagree with her at times] 😅

Dissent is not the issue but instigating Violence is. Videos have been seen by all. Hope INDIANS do the needful to make Ur going to be released FILM becomes an economic Disaster like Dipika Padukone FILM. Money does not have Religion & hurts hardest when HIT.

I can’t wait till Punishing a Gaddar is normal again!! 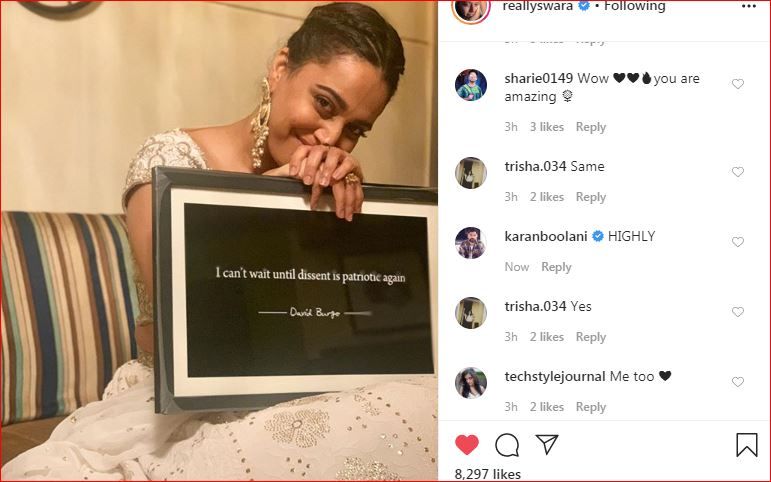 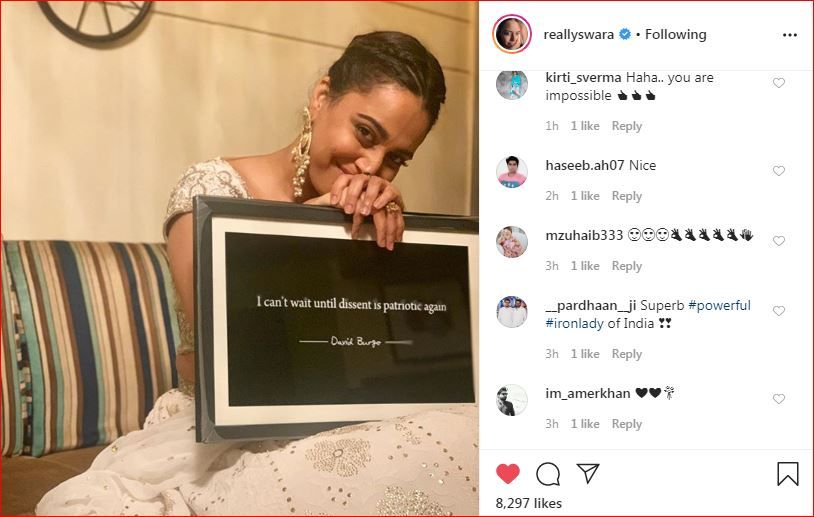 I’d rather be in a time where we discussed and moved forward towards the progress of this country than blind dissent. And this active work should be the main objective and not the blind dissent. Work is patriotic ma’am. Indigenous futuristic problem solving hard work. 🙂

Oh that crooked smile…just like joker who wants to see the world burn..

Sassy and glamorous as she is, Swara is always seen in the lap of controversies for being boisterously honest despite the celebrity tag. Not only is she credited for giving us a refreshing scene, now and then, of her celebrity self embracing her imperfections but also her JNU blood that is equally famous for her parallel life as a Twitter activist on social issues and liberal causes.

On the professional front, Swara is gearing up for her upcoming movie, Sheer-Qorma, opposite Divya Dutta. Swara essays the role of Faraz Arif Ansari‘s “gentle and shining Sitara” in Sheer Qorma. Swara had earlier descibed the film as, “A beautiful ode to love, love that binds is all. Notwithstanding gender, race, religion, generation or sexuality” while mentioning “the honour and dream of sharing screen space with the legendary Shabana Azmi and iconic Divya Dutta25.” Directed by Faraz Arif Ansari, the movie is bankrolled by Marijke Desouza.