Nayanthara Issues Statement Against Radha Ravi’s Misogynist Behaviour, Thanks DMK And Questions Nadigar Sangam For Not Taking Any Action

Radha Ravi questioned Nayanthara playing the role of Sita and also brought up the Pollachi sexual harassment case at the event.

Tamil actress Nayanthara has released an official statement against actor Radha Ravi who slut-shamed her at the launch of her own film’s trailer. In her statement, Nayanthara has thanked everyone who supported her and other women against Ravi who has made misogynist comments in the past as well.Also Read - Annaatthe Beats Sooryavanshi at Box Office With Its Opening Weekend Collection But There's a Twist | Detailed Figures

Following this, DMK (Dravida Munnetra Kazhagam) suspended the actor from the party. MK Stalin even issued a statement regarding the same on Twitter and wrote, “Radha Ravi’s comments are unacceptable in DMK which puts women’s rights in the forefront. Party cadre should express without indignity and action will be taken on those who violate.” Also Read - Sajid Khan to Return With Comedy 3 Years After #MeToo Allegations, Riteish Deshmukh-John Abraham to Join?

Nayanthara even thanked DMK for taking notice of the issue and doing the righteous. She said, “First & foremost , it is my bounden duty to place on record my sincere thanks and deepest appreciation to the President of Dravida Munnetra Kazhagam Thiru.M.K.Stalin for swiftly taking action against misogynistic speeches of Thiru.Radha Ravi. My sincere thanks to you sir.” Also Read - Samantha Replaces Nayanthara In Shah Rukh Khan-Atlee's Film Due To Aryan Khan Case? Find Out Here

Her entire statement read, “I rarely issue public statements, as I have always allowed my professional work to speak for itself. However desperate times mandate desperate measures. Today, I am compelled to issue a detailed statement so as to clarify my own position and also to champion the cause of women who bear the brunt of male insensitivities and sexism.

First & foremost , it is my bounden duty to place on record my sincere thanks and deepest appreciation to the President of Dravida Munnetra Kazhagam Thiru.M.K.Stalin for swiftly taking action against misogynistic speeches of Thiru.Radha Ravi. My sincere thanks to you sir.

At the outset, I would like to remind Mr.Radha Ravi and the likes of misogynists like him that they were also given birth by a woman. By demeaning the status of women and passing sexist remarks, these retarded men get a feeling of machismo. I feel terribly sorry for the way they treat women in an opinionated way and my empathy remains with all the women who live in the families of these ‘macho’ men. As an actor of considerable seniority and work experience, Mr. Radha Ravi should have led the younger generation by example, instead he has chosen to take up the role of a misogynist ‘role model’. These are troubled times for women, as women are establishing themselves predominantly in every field of public life and asserting their due place in this era of meritocracy.

When actors like Mr.Radha Ravi fall out of business and become irrelevant, they tend to rely on cheap popularity tactics in order to grab some limelight.

What remains ghastly shocking about his male chauvinistic speeches are that he never ceases to get applause and laughs from some members of the audience. As long as the audience encourage sexist remarks, speakers like Mr.Radha Ravi will continue to thrive on misogyny and cracking of denigrating jokes against women. I strongly urge well intentioned citizens and my beloved fans to deeply discourage the behaviour of the likes of Mr.Radha Ravi. Not withstanding the aforesaid advisory, through this statement I would like to strongly register my condemnation and protest against the derogatory speeches made by Mr.Radha Ravi against women and children in general and me in specific. 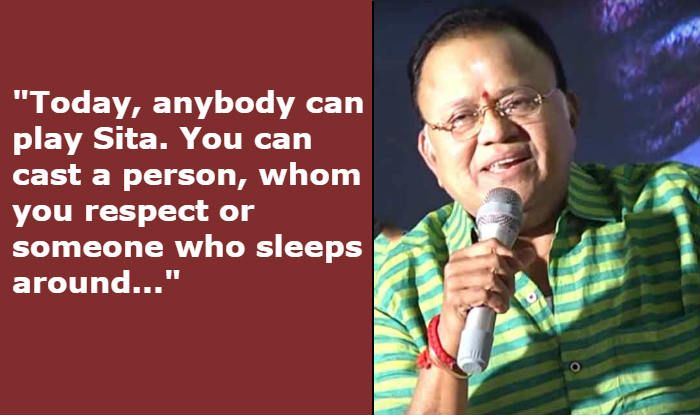 God has been amply kind in giving me wonderful professional opportunities and the affectionate moviegoers of Tamil Nadu have amply rewarded me for my good performances. Irrespective of all negative remarks and aspersions cast upon me, I shall continue to take up the multifaceted roles of Sita, ghost, Goddess, friend, wife, lover, so on and so forth with the sole intention of providing maximum entertainment to my fans.

Lastly, my humble question to the South Indian Artistes’ Association (Nadigar Sangam):— Will you set up the Internal Complaints Committee as per the Hon’ble Supreme Court’s dictum and commence an internal inquiry as per Vishakha Guidelines???

Once again, thanking all the good hearts that have stood by me yet again supporting me through this little phase of negativity!”

While speaking at the event, the senior actor questioned Nayanthara being cast in the role of Sita and also brought up the Pollachi sexual harassment case. He was slammed for his speech on social media. Even KGR Studios banned the actor and requested other production houses to also react strongly against him.

Topics:
Me Too MovementNayanthararadha ravi