Vanitha Vijayakumar releases a long press note while announcing her wedding with filmmaker Peter Paul. The actor says that she was a happy single mother but Peter filled those voids in life that she never knew existed.

Tamil actor Vanitha Vijayakumar has announced her wedding to filmmaker Peter Paul. The Bigg Boss 3 star issued a press release revealing all about the wedding and how she fell in love with Peter. The actor said that she has been taking care of her kids all alone and Peter lent a supporting hand and made her realise that she could grow old with someone she truly loves. Vanitha also mentioned that Peter talked to her kids and only when they approved of them getting together, they decided to take the plunge. Also Read - 'There Will be Peace Now': Twitter Celebrates as Payal Rohatgi's Handle Taken Down, Check Hilarious Memes Inside

The wedding is going to be a private affair at Vanitha’s house in Chennai on June 27. The actor also wrote that it’s going to be a low key affair but she would share the pictures and videos from her big day soon after the wedding. Also Read - Bigg Boss 14: TikTok Star Amir Siddiqui Approached For Salman Khan Hosted Show?

Vanitha also credited Peter for encouraging her to launch her own YouTube channel. She said, “He walked out of my dream into my life. He filled the void I never knew existed. Surprisingly I felt secure and complete around him. He stepped in as a friend and helped me when I was lost without and technical help and support for my YouTube channel during the lockdown. He made things happen in such a way that I was at ease, so calm, stress free and felt taken care of.” (sic) Also Read - Bigg Boss 14 Latest News: 13 Celebrities, 3 Commoners to Enter The House; Jungle Theme For Salman Khan's Show This Year

Peter is also a visual effects director and has reportedly worked in various films across the industries including both Hollywood and Bollywood. 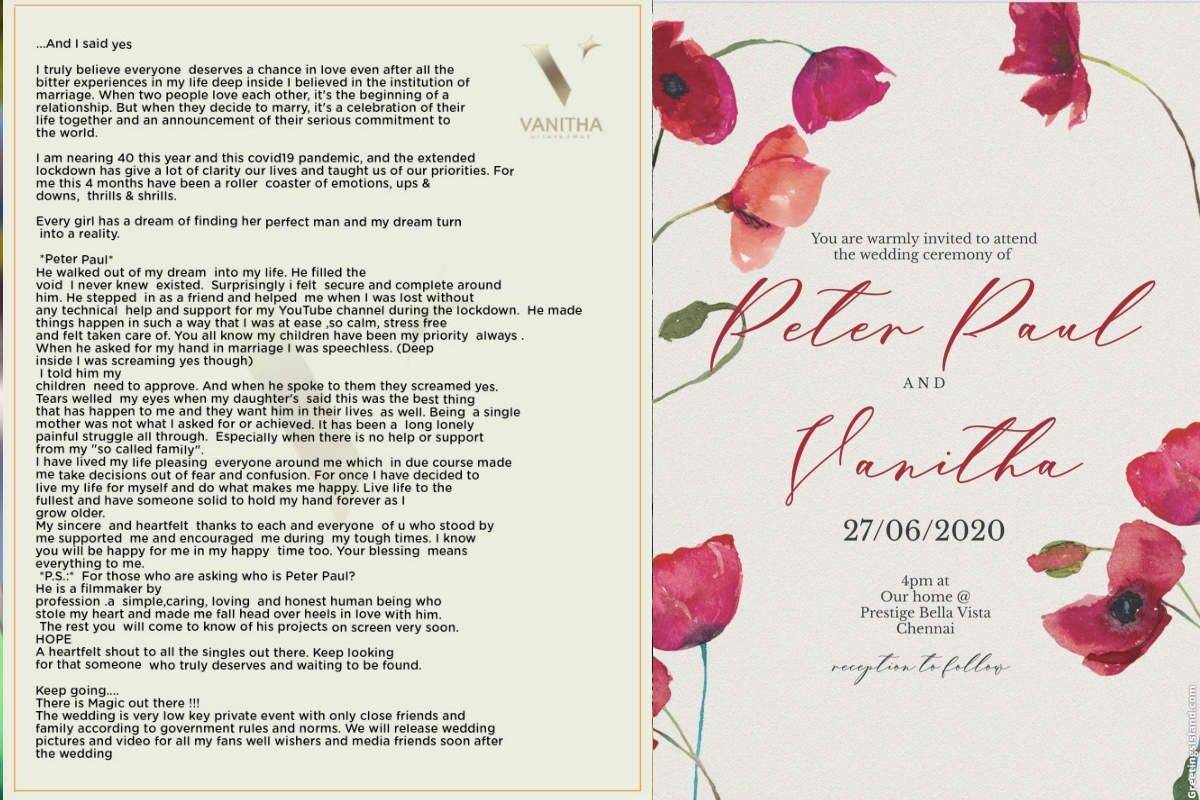 Our congratulations to the couple!