Master Actor Vijay Sethupathi Apologises For Cutting Cake With Sword, Netizens Call Out For His Arrest

Master actor Vijay Sethupathi has apologised to his fans for cutting his birthday cake with a sword. In a detailed statement in Tamil, he said that he has set a bad example by cutting the cake with a sword and promised to be careful in the future. He celebrated his birthday on the set of his upcoming film helmed by Ponram along with the cast and the crew. The picture from the celebrations went viral on social media and became a controversial topic among netizens.Also Read - Pics of 2 'Kissing' Owlets Delight The Internet, IFS Officer Calls it 'Pre-Wedding Photoshoot'

His statement reads, “My heartfelt thanks to film personalities and fans who wished me on my birthday. Three days ago, a photo which was taken during my birthday celebration has become a controversy now. In the photo, I had cut my birthday cake with a sword. I am going to act in director Ponram’s film, in which the sword plays an important role. Since I celebrated my birthday with Ponram and the team, I used the sword to cut my cake. Many pointed out that this is a bad example. From hereon, I will be careful. If I had hurt anyone, I apologise and regret my action.” Also Read - Year Ender 2021: #BTSButter to #VicKat, Top Entertainment Hashtags of The Year

In the past, the Chennai police have arrested local goons for cutting a cake with a sword. Pointing out the incident, netizens said that what Vijay did was an offence and hence he should be arrested. Also Read - Katrina Kaif To Star With Vijay Sethupathi For Her Next Film 'Merry Christmas' 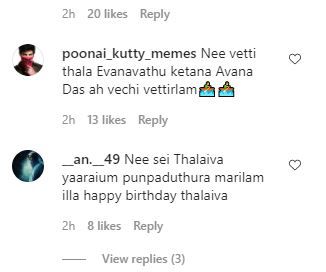 Meanwhile, his film Master, directed by Lokesh Sethupathi has crossed Rs 100 crore at the worldwide box office. The film is expected to break records in the future. The story is based on a young professor, John Durairaj aka JD (played by Vijay), who gets into a clash with a deadly gangster, played by Vijay Sethupathi, which follows the crux of the film. The film features Vijay, Vijay Sethupathi, Malavika Mohanan, Andrea Jeremiah, Arjun Das, and Shanthanu Bhagyaraj in pivotal roles.