Watch the full video in the player below which shows Kangana Ranaut and Irrfan exchanging notes on acting and discussing the curse of the 100 crore benchmark! 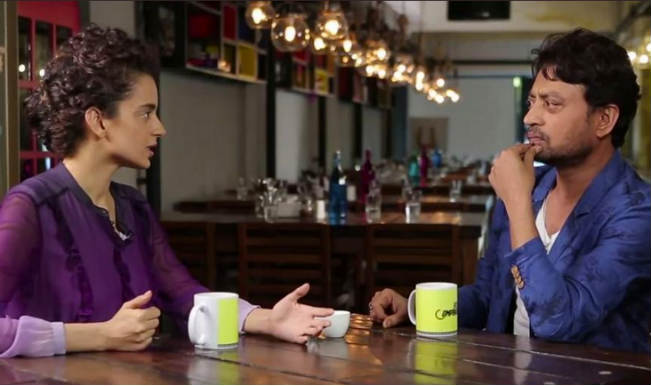 Tanu Weds Manu Returns and Piku have been this year’s most impressive films so far. While Kangana Ranaut is celebrating the success of her latest film Tanu Weds Manu Returns and Irrfan Khan cannot get enough of the compliments he’s been receving for his performance in Piku. The two came together for Anupama Chopra’s chat show and the video below shows them discussing each other’s highly impressive performances in their respective films. Also Read - Dhaakad Poster Out: Kangana Ranaut is 'Fearless And Fiery' in First Look, Film To Release on This Date

While most of us are in awe of the Deepika Padukone starrer, Kangana explores the depths of the film, the layers of acting with Irrfan. She also appreciates the content of the film and termed it as “massy.” Kangana, who is mesmerised by Irrfan’s work, also discusses with Irrfan the rythm of language while delivering dialogues in his movies. Also Read - 'Pay Or We'll Destroy You'! Vikas Khanna Seconds Kangana Ranaut's Nepotism Claim, Shares His Experience

The Tanu Weds Manu Returns actress says how she was earlier available for any sort of role, but now, the actress has become a little more posessive abou her energies and abilities which is making her raise her bar. Irrfan, on the other hand, says that following your instinct is the best thing to do when it comes to choosing roles.

Watch the full video in the player below which shows Kangana Ranaut and Irrfan exchanging notes on acting and discussing the curse of the 100 crore benchmark!