Bigg Boss 12 : Salman Khan to Launch The Show in Goa Instead of Lonavala; Read Details

The most controversial reality show Bigg Boss is all set to return with its season 12 next month. As per the reports, the reality show will feature seven commoner jodis and six celebrity duos. The jodis will not only be couples but also siblings, mom-son, best friends and so on. This season is loaded with surprises, in fact the makers are trying their best to make this season more exciting. The press invites for the launch of the show is now out and  for the first time, host Salman Khan will be launching Bigg Boss 12 out of Lonavala. The press conference is said to be held in Goa this year.Also Read - Lovebirds Aly Goni- Jasmin Bhasin Slay Their Airport Look In Comfy Outfits- See Pics

The reason behind this change in location has not been spilled but seems like it is just to experiment with something new. Talking about the same, Pinkvilla reported a source saying, “Every year COLORS comes up with unique themes and exciting ideas to launch their marque and beloved show Bigg Boss. This year around also the channel came up with the fun idea of launching the upcoming Bigg boss season 12 in Goa with none other than Salman Khan, the host. The invite too, with it’s beachy feel is a total eye-pleaser and specifies a dress code, calling the invitees in sunny and colorful clothing”. Also Read - Shah Rukh Khan-Salman Khan Reunite as Pathaan And Tiger in Aditya Chopra's Biggest Action Film Ever, Read Deets 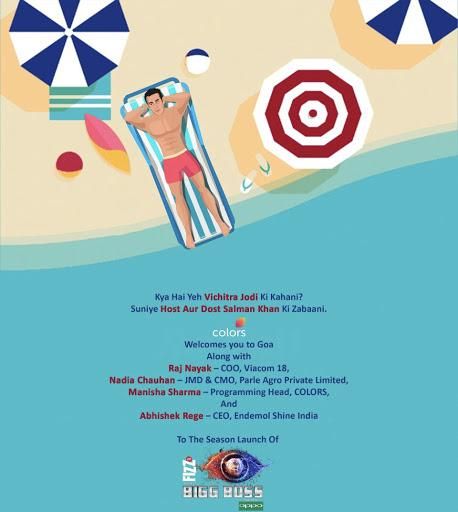 Other interesting things about this season is that the show will have three common jodis and three celebrity couples. Out of 21 contestants, 12 will be part of the Jodi clan and the remaining nine contestants will comprise of three celebrities and six commoners, who will enter the show as an individual. Not only this, reports suggest that this time the show will also have two gay partners as the contestants of the house.

The show will premiere on September 16 on Colors.