Tevar movie review: Watch the Arjun Kapoor-Sonakshi Sinha film at your own risk!

Tevar is too slow a movie and has been dragged way too much. 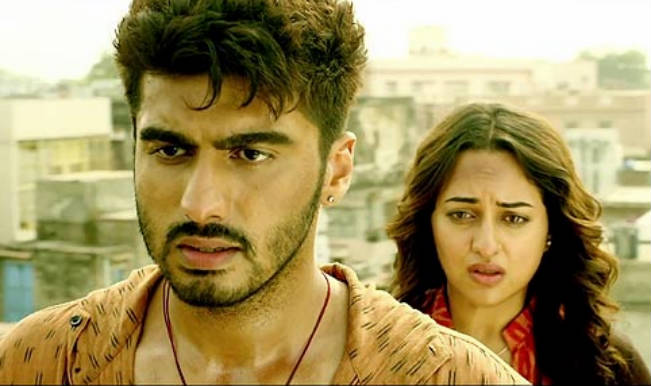 There are films like Barfi! and Ugly that leave a gripping impact on the audience and there are films like Tevar, which you would want to watch at your own risk! The era of clichéd Bollywood romance and one hero killing all the villains has gone long past by, but it is rather disappointing that films like Tevar are still being made. Also Read - Virgil Abloh's Death: Priyanka Chopra, Karan Johar And Others Express Grief as Popular Designer Dies of Cancer

The first big budget movie of 2015, Tevar starts with introducing Arjun Kapoor as Pintu, who is an excellent kabaddi player of his town Agra. Known for their gundagardi, Pintu and his rowdy gang once visit Mathura where he meets Radhika (Sonakshi Sinha), the sister of a small-town journalist. READ: Tevar music review: Let’s Celebrate and Main Nai Jaana Pardes get a thumbs up! Also Read - 'All I Want Is Make You Smile'! Arjun Kapoor Drops Mushy Photo For Ladylove Malaika Arora

It is also when Gajendra Singh (played by Manoj Bajpayee), the brother of a politician who is himself involved in dirty politics, sees Radhika and falls madly in love with her. On confessing his love for Radhika, Gajendra becomes a psycho, as she refuses his marriage proposal.

After Radhika’s journalist brother insults Gajendra publicly, he kills the brother. The whole town including the police officials are under Gajendra’s control now. Radhika’s parents finally decide to send her to the US secretly as Gajendra forcefully plans to marry her.

The main twist in the story of Tevar begins when our very own superman Pintu and Radhika meet. The story revolves around how he fights for Radhika and saves her from the clutches of Gajendra. In the end, the same old love story – Pintu and Radhika fall in love with each other. READ:  Comedy Nights With Kapil: Tevar jodi Sonakshi Sinha and Arjun Kapoor have a ball on the show!

Tevar is too slow a movie and has been dragged way too much. Manoj Bajpayee’s spectacular performance and Raj Babbar’s surprise appearance in the film are the only two things to look out for. As for Sonakshi Sinha, after delivering an overwhelming performance in films like Dabanng and Lootera, we wonder why the actress chose to do Tevar. Arjun Kapoor has overacted all through the movie. The film is two hours and forty minutes long and if you really wish to test your patience, go ahead and watch Tevar!