Bollywood filmmaker Anubhav Sinha took to Twitter to apologise after he went on an abusive ran over a box office report of his movie Thappad.

This remark did not go down well with Article 15 director and his took to twitter and wrote, “And I love you too… in har*****don ne filmon ka kotha bana diya hai (these b**tards have turned filmmaking into a brothel). Last I checked it was an art form. My money. My movie. My profit. My loss. Who the f*ck are you? Have I issued any public shares? Have you bought any??? Go watch the film. Like it. Hate it. Your call,” Also Read - Article 15 Box Office Collection Day 6: Ayushmann Khurrana-Anubhav Sinha’s Film Mints Rs 31.16 Crore

“These motherf***rs seem to get my collections before me. Just for general awareness I get my collections in 2-3 days. Before that whatever they put out is sheer speculation and their sweet desire,” added Sinha. Also Read - Article 15: Anubhav Sinha Reacts to Film's Ban in Roorkee, Says 'Will Challenge it in Court' 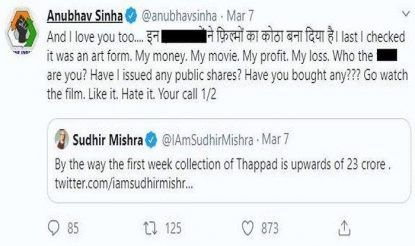 However, after his abusive rant, Anuvhav tweeted his apology and said sorry to all the women, younger ones and elders on his timeline.

“My apologies for my language ladies. Sincerely. It is the love of those 150 people who made Thappad for the film that was being disrespected that shot me off. Apologies to all women and elders and younger ones on my timeline. SORRY!!!” wrote the Thappad director.

Starring Taapsee Pannu in the lead role. Thappad is a story of domestic violence and how a woman decided to leave her husband after he slaps her in a party. The film also stars Tanvi Azmi, Pavail Gulati, Kumud Mishra , Ratna Pathak Shah and Dia Mirza in supporting roles.