Amitabh Bachchan, Aamir Khan starrer Thugs Of Hindostan has been apparently leaked online by infamous film piracy website Tamil Rockers on the very first day of its release and the worst part is that the movie has been leaked in HD quality. The website uploaded the movie in all three languages (Hindi, Telugu and Tamil). The movie was released yesterday, November 8, 2018. Also Read - Katrina Kaif in Red Sports Bra and Tights is Setting Fitness Goals, Does Pilates with Yasmin Karachiwala- Watch Video

Following the leak, movie buffs wrote to the Tamil Film Producers Council (TFPC) seeking legal action against the website for the leak. Earlier this month, the website had leaked Thalapathy Vijay-starrer, Sarkar after which the council stated that in order to prevent the site from pirating movies, theatre owners have to ward off people using cameras and mobile phones in cinema halls. Also Read - The White Tiger Full HD Available For Free Download Online on Tamilrockers And Other Torrent Sites

Take a look at the screenshot taken from the piracy website: 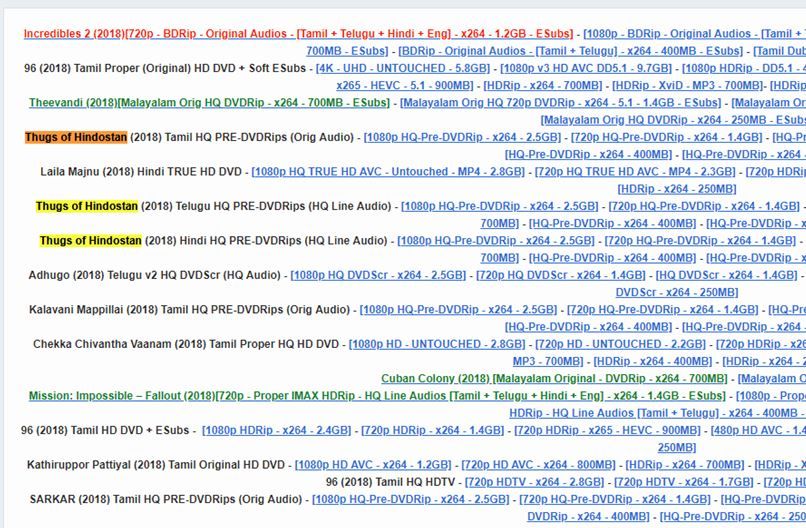 Thugs of Hindostan, which marks the second collaboration between Aamir and director Vijay Krishna Acharya after Dhoom 3, also stars Katrina Kaif, Fatima Sana Shaikh and Lloyd Owen. Despite huge buzz about the period drama, which is about a band of thugs fighting the British rule in India, the movie has reportedly received negative to average reviews from both audience and critics.

As per the early estimates, the action-adventure fantasy film raked in Rs 50 crore on its first day making it the biggest opener of all time beating Shah Rukh Khan’s Happy New Year (Rs 44.97 crore), which was also a Diwali release.

Film trade analyst Taran Adarsh has however given it just two stars, saying the movie was disappointing. He termed the movie as a formula-ridden plot, and a screenplay of convenience, with the shoddy direction being the main culprits.

In the second tweet, he wrote, “#ThugsOfHindostan may reap the benefit of the holiday period + tremendous hype + impressive names in its cast… But will find it difficult to sustain after the initial euphoria settles down… #TOH is a golden opportunity lost, a KING-SIZED DISAPPOINTMENT!”.

The movie is written and directed by Vijay Krishna Acharya, and produced by Aditya Chopra under his banner Yash Raj Films.