Tiger Shroff Slyly Accepted That Baaghi 2 Co-Star Disha Patani Is His Girlfriend On National Television And No One Even Noticed!

Tiger Shroff and Disha Patani’s Baaghi 2 has been roaring at the box office. While it is natural for the actors to be in the news for the next few weeks as the BO numbers of their film soar, they will also be written about their relationship. Fans have always been interested in knowing if Tiger and Disha are really dating. While there have been ample speculations around their rumoured love affair, the two actors have always hidden the truth about their personal equation under the ‘we are great friends’ tag.Also Read - 'Inhe Thand Nahi Lagti!' Disha Patani Trolled For Her Sizzling Hot Look at Tadap Screening - Watch Viral Video

However, we now have a little clarity on what Tiger feels for Disha. The past few weeks, the two have been out and about promoting their film Baaghi 2, which is directed by Ahmed Khan and produced by Sajid Nadiadwala. They have been on various reality shows even and this happened on High Fever Dance Ka Naya Tevar, where their director is one of the judges along with Lara Dutta. It so happened, that a participant and a huge Tiger Shroff fan, asked him to reveal about his current girlfriend while the two were interacting on the stage. Also Read - Disha Patani’s Perfect Booty Shake With Girl Gang On Nicki Minaj’s ‘High School’ Is Absolutely Unmissable | Watch 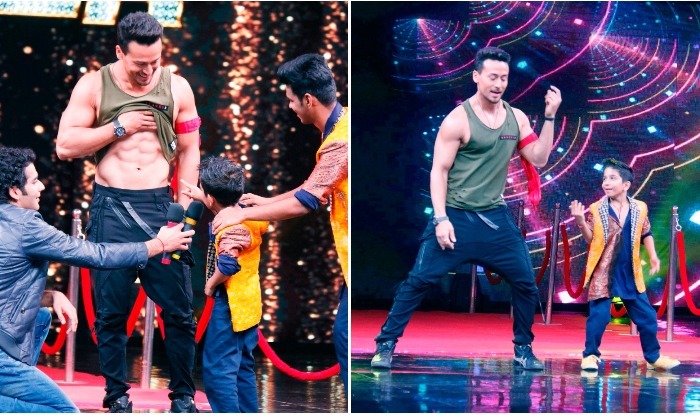 Tiger Shroff’s little fan who demanded to know who his current girlfriend is; count how many abs he has and indulge in a dance-off on High Fever Dance Ka Naya Tevar

Tiger, who is known to be a shy person, first blushed, while Disha, who was sitting on the judges panel, blushed as well and exchanged looks with Ahmed and Lara. Tiger said, “My first girlfriend is my mother (Ayesha Shroff). After then, there have been many, the list is very long.” But the little guy once again harped on his question and asked, “Who is your girlfriend now.” Realising that there is no escaping this query, Tiger said. “To know that, you will have to watch my film Baaghi 2.” The camera next panned at Disha, who couldn’t stop smiling. Also Read - Fitness Tips: Tiger Shroff Flaunts His Ripped Body In New Workout Video, Fitness Secrets Of Tiger Shroff Revealed | Watch Video

Well, we now know that Disha plays Tiger’s love interest in the recently released actioner. Did Tiger’s answer on High Fever Dance Ka Naya Tevar mean that she is his lady love in real life too? Your guess is as good as ours! For all you know, he just slyly answered the most asked question and no one even noticed!