We share a list of our Top 23 Bollywood dance numbers of 2014. So whether you're rehearsing for a wedding sangeet, a DJ party or New Year's at home, here is some foot-tapping music to help you do so. Put on your best dancing shoes! 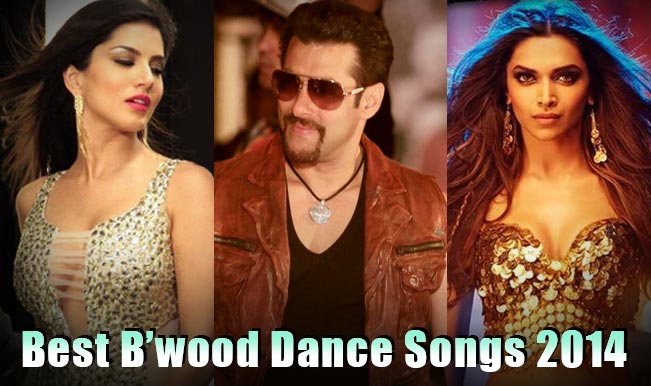 We share a list of our Top 23 Bollywood dance numbers of 2014. So whether you’re rehearsing for a wedding sangeet, a DJ party or New Year’s at home, here is some foot-tapping music to help you do so. Put on your best dancing shoes! Also Read - Sunny Leone Tries Aerial Yoga For The First Time To Keep Herself Fit

We never knew these kind of lyrics could be written for a Bollywood item song – Yeh duniya pital di, Baby Doll mein sone di. I mean, really? But then the music of this Punjabi track composed by Meet Brothers is so good that we didn’t really mind the lyrics. Add to that was Kanika Kapoor’s fresh voice. And, of course, for men it Sunny Leone’s oomphilicious dance that makes them want to watch the song again and again! Baby Doll is 2014’s biggest Bollywood hit song.

If Sunny Leone mesmerised Bollywood lovers at the beginning of the year, Deepika Padukone showed us her seductive moves towards the end of 2014, as Mohini in the song Lovely from Happy New Year.

Another Punjabi-influenced number, Saturday Saturday starring Alia Bhatt and Varun Dhawan peps you up and is a great disco number. The song was seen in the movie Humpty Sharma Ki Dulhania.

This is a surprise dance number of 2014! Who would’ve thought people were interested in watching the ‘hotness’ of Sonam Kapoor? But she surprised fans with her cute ‘bum’ act in Engine Ki Seeti. On top if that, the song had the movie’s handsome hero Fawad Khan.

An absolute fun song showing Salman Khan chasing after Jacqueline Fernandez, Jumme Ki Raat is the most popular number from Kick. Salman Khan is at his best in this one!

This song had superstar Aamir Khan saying that Hrithik Roshan is the best dancer in Bollywood. But didn’t we always know it? In fact, as compared to Hrithik’s earlier numbers, this one hardly shows off his dancing skills. But still, we love seeing him swoon along with Katrina Kaif.

We aren’t done with Sunny Leone yet. She makes an entry again with a Meet Brothers Anjjan song, this time as an item girl for Hate Story 2 that did not star her. Pink Lips is no Baby Doll, of course, but is in the same league and is catchy enough to hum and dance to.

Besharmi Ki Height is a typical love dance number made for college-goers. The song has the handsome Varun Dhawan and the sexy Ileana D’Cruz dancing away, and thankfully, not doing any besharmi on screen!

Jumme Ki Raat wasn’t the only fundu dance number in Kick. Salman Khan as the devil in Devil – Yaar Na Miley song was again watchable, but of course, with the help of the sexy Rockstar babe Nargis Fakhri.

Another song from Khoobsurat, starring Sonam Kapoor, Fawad Khan and Badshah, the man from Yo Yo Honey Singh’s clan who challenged him with this song – and won after Abhi Toh Party Shuru Hui Hai became popular as a crazy party number with funky lyrics for party animals.

For some, this is the most irritating number of the year. But nevertheless, Punjabi rapper Yo Yo Honey Singh’s Marathi number Aata Majhi Satakli is catchy and you cannot help but play it in a loop in your head. The song was made for Singham Returns and starred Ajay Devgn, Kareena Kapoor and Yo Yo Honey Singh. But it was the little boy with a big wristwatch mouthing Aata Majhi Satakli who stole the show from the big stars.

In this song, Varun Dhawan is what we call in Hindi – Chha gaya. He’s all over and the girls, including Ileana D’Cruz, are hardly noticed. This song is a take on Amitabh Bachchan’s hit song Jahaan Teri Yeh Nazar Hai.

Govinda, the great comic and drama actor of the 1980s and `90s, had taken a forced sabbatical after his appearances in Partner and Raavan. He was recently seen in Kill Bill in a main negative role, but it was the song G Phaad Ke in which the original dancing star of Bollywood was liked by fans. But there surely had to be more scope for the Govinda to show his dancing talent. Nevertheless, the song, composed by Sachin-Jigar, was briefly popular.

Another Sachin-Jigar composition, the song Dance Basanti was an add-on item number in Karan Johar;s production Ungli. While we really didn’t care about Emraan Hashmi in the song, we did like Shraddha Kapoor in a never-seen-before avatar.

This is a hilarious song with some crazy lyrics that every girl identifies with. Composed by Sneha Khanwalkar (Gangs of Wasseypur famed), Maa Ka Phone Aaya plays on the unfortunate ‘mother’ swear words in Hindia. But it quite humorously tells the story of a nosy mother making repeated phone calls to her daughter, just when she is about to get romantic with the man of her dreams. We’ve all gone through such situations, haven’t we?

If you liked Hrithik Roshan’s dancing in Teri Meri, wait till you watch this one! Hrithik absolutely amazes us with his moves and his physique in the Bang Bang title song, accompanied with equal talent from Katrina Kaif. What’s more, he channels Michael Jackson and burns the dance floor with it. We can watch this song again and again!

A lot of hardcore music lovers despise this track from Shah Rukh Khan’s movie Happy New Year, but the Vishal-Shekhar song did catch on before the film’s release. It was definitely one of the more bearable tracks from the movie, and makes for a decent Bollywood-style dance number.

This Yo Yo Honey Singh caught on like a house on fire among the masses, and especially the youngsters. The lyrics and tune give a very young feel and are apt for the movie Yaariyan. But for the young male viewers, the typical milieu of bikini-clad babes on the beach and by the swimming pool was recreated and it worked.

The movie was a bromance but in this song, Priyanka Chopra stole the show from Ranveer Singh and Arjun Kapoor, in a way because the song was the boys’ love for her. But it was because of its familiar tune and beat that it became a hit.

A trance number, all right, but you can swoon to it much the same doped out way that Lisa Haydon does. Composed and sung by Yo Yo Honey Singh and Neha Kakkar, this number was quite a hit with lovers of both trance and grass.

We began with Sunny Leone, and we coincidentally end with her. The hot actress had another good dance song to her credit, Chaar Botal Vodka sung and composed by Yo Yo Honey Singh. Sunny Leone is only showing her moves in this one and not singing, but then, we don’t mind that, do we?

A take on the nursery rhyme Johnny Johnny, Yes Papa, Eating Sugar, No Papa, this is yet another song about binging on booze but it’s one of the better ones. Akshay Kumar and a hot Tamannaah Bhatia add to the song’s energy.

Yo Yo Honey Singh repeats his bikini babes thing with this song. Alcoholic starred Akshay Kumar in a beach song with hot girls where he looked completely out of place because of his age. But the song works as a dance number in parts.

So, which one of these songs are you playing for your party?