Recently, Federation of Western India Cine Employees and Indian Motion Picture Producers Association had written to CM Uddhav Thackeray to seek permission to resume the post-production work of the films, shows and other projects which had sparked rumours about the same starting from June 2020

The Tinsel Town had been abuzzed with reports of television shows and shoots commencing in June end and the rumour mills had it running that the Federation of Western India Cine Employees (FWICE) has even issued guidelines for one inspector and ambulance per set at all times. According to the rumours, 50% workers will be allowed to work while the producer will have to pay all the workers and pay compensation of Rs. 50 lakhs if any worker suffered coronavirus. Also Read - US President Donald Trump Cuts Ties, Terminates WHO Funding Permanently

Calling out all these reports, Indian Motion Picture Producers Association (IMPPA) clarified that shooting for TV projects will not commence from June. In their official press release, the IMPPA stated, “To verify the authenticity of the news, as no such decision or guidelines have ever been agreed to by all the Producers’ Associations, the undersigned spoke to Mr. Ashok Dubey, Gen Secretary of FWICE who informed that all such news and information of such decisions and guidelines being implemented by FWICE was totally false and baseless as no such decision has been taken till date.” Also Read - Coronavirus Delhi Updates: Two More Hospitals Declared As Covid-19 Facilities

The IMPPA had cross-checked with Gen Secretary of FWICE, Ashok Dubey, before coming out with the release. IMPPA added, “FWICE also confirmed that no such decision or guideline shall be finalized unless all the Producers’ Associations agree to the same and therefore, we have to inform all Producers and everyone else concerned with the Film and Entertainment industry that any decision or guideline relating to the industry restarting after Coronavirus or any such matter shall be valid and subsisting only if the same is counter signed and authenticated besides FWICE by all the Producers Associations including by President of IMPPA.” Also Read - Lockdown 5.0 Guidelines Likely Today: Will Metro, Malls, Restaurants Open? Check State-Wise Plan

However, to refrain from any more losses due to COVID-19, the FWICE and IMPPA on Tuesday wrote a letter to Maharashtra Chief Minister Uddhav Thackeray to seek permission to resume the post-production work of the films, shows and other projects that are nearing permission. 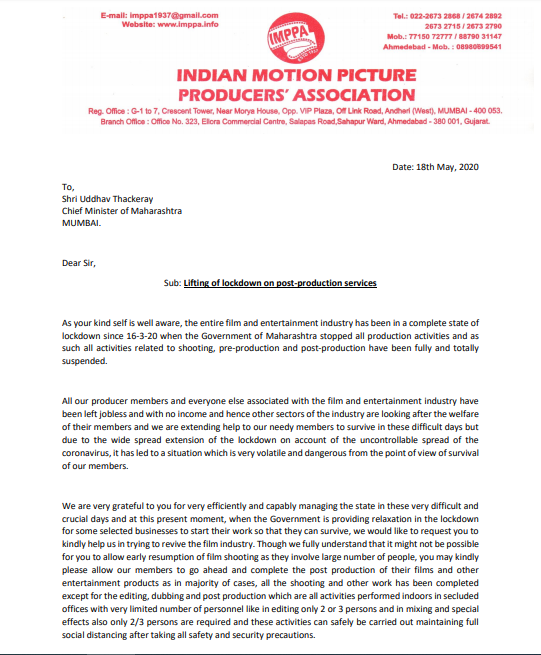 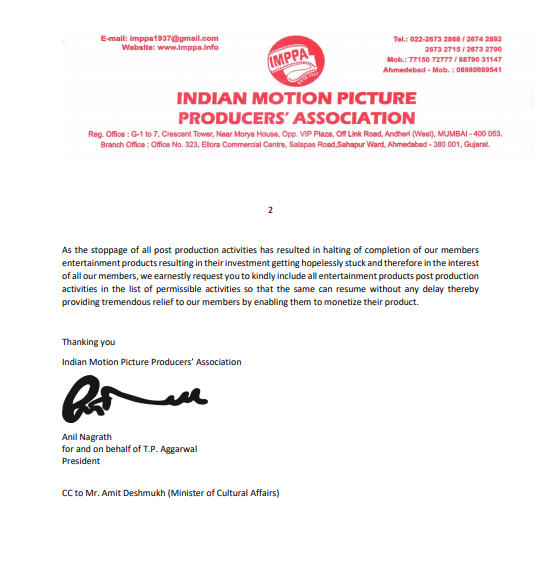 In the letter, they said that several producers have invested crore of rupees which are now hanging in the middle due to the coronavirus lockdown.