Trending Bollywood News Today, March 21: Alia Bhatt posts a beautiful picture of herself clicked by Ranbir Kapoor and the comments of Akansha Ranjan Kapoor-Shaheen Bhatt show that RK is quite hit among Alia's folks.

Trending Bollywood News Today, March 21: Actor Alia Bhatt is under self-quarantine at home and so is Ranbir Kapoor. The latest photo of the actor on Instagram says a lot about not just her bonding with RK but also about how he’s hit among her friends and sisters. Alia took to Instagram to share a picture of herself clicked by Ranbir. It was a beautiful picture that showed Alia looking out of her window to the stunning sunset. Alia captioned the picture asking the fans to stay home and stay safe as the coronavirus spreads across India. She then mentioned ‘RK’ and gave the picture credit to him. Check out Alia’s photo here: Also Read - Sidharth Malhotra Takes a Leaf Out of Ex-Girlfriend Alia Bhatt's Book During COVID-19 Quarantine And THIS Picture is Proof!

While the photo is all lovely and speaks volumes of Alia’s chemistry with Ranbir, it’s the comments on the photos that add more interest. Alia’s bestie Akansha Ranjan Kapoor teased the actor by saying how she wishes for her boyfriend to learn to click pictures like Ranbir. “Training my bf to be more like yours 😉”, she wrote. Alia’s sister, Shaheen Bhatt also pulled her leg by saying Ranbir never clicks such good photos of anyone except his girlfriend. “So he only takes bad pictures of the rest of us then”, she wrote. Check this out: 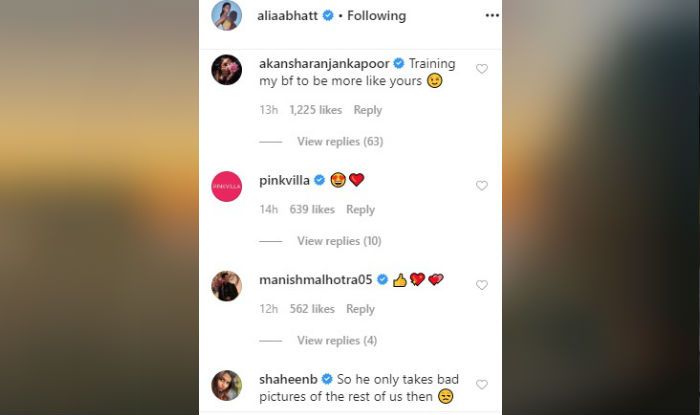 Alia’s Instagram timeline is filled with her photos clicked by Ranbir. This sharing and clicking of pictures began in Bulgaria where Alia and Ranbir kick-started the shooting of their upcoming film Brahmastra in 2018. What do you think about Ranbir’s photography skills though?