The childhood picture of Trishala Dutt shows Richa Sharma in all smiles flaunting her dimple.

Actor Sanjay Dutt’s eldest daughter Trishala Dutt have been living away from social media for a long now. However, she recently shared a picture of her late mom Richa Sharma holding her in arms. The little baby is Trishala in this picture. She immensely misses her mom and often shares photos with her and writes beautiful messages for the late actor. Richa passed away in 1996 after getting diagnosed with a brain tumor. Also Read - Sanjay Dutt’s Sexist Rant on How to be a 'Real Mard' in This Old Ad Will Make Your Blood Boil | Watch

The throwback picture shared by Trishala shows Richa in all smiles flaunting her dimple while she is fast asleep. The star kid posted the photo with a caption stating, “mom & I #1988 #ripmommy” Also Read - Nora Fatehi in Metallic Thigh-High Slit Gown Burns The Internet

Maanyata Dutt was quick to like and comment on the post. She wrote “Beautiful” along with two red heart emojis and a hug emoji. Trishala’s aunt and Sanjay Dutt’s sister Priya Dutt has left a heart-warming comment on the post. She wrote, “So beautiful, she is an angel in heaven now, Trish always looking over you. She loved you more than anything in this world. God bless her soul”. Also Read - Sanjay Dutt Gets His First COVID-19 Jab, Shares a Proud Note on Social Media 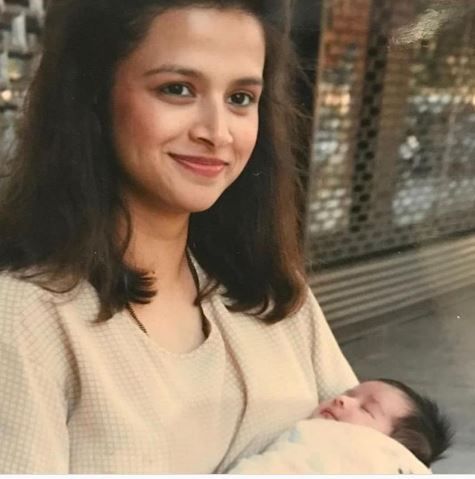 Trishala has been through a really tough phase after the sudden demise of her boyfriend in July this year. She revealed the news a few days after the terrible incident and expressed how she has been dealing with excruciating pain and trying to collect herself up every moment. In the caption of the post remembering her boyfriend, she had written, “Thank you for loving me, protecting me, and taking care of me. You have made me the happiest I’ve ever been in my life. I’m the luckiest girl in the world to have met you & beyond blessed to have been yours. You will live in me for eternity.