There’s been a shift on the TRP list of week 28 – 10th July 2021 To 16th July 2021 this time with Super Dancer Chapter 4 losing its position in the top 5 TV shows. Unsurprisingly, Rupali Ganguly and Sudhanshu Pandey’s Anupamaa continues to rule the hearts of the audience as it is on the top of the TRP list for the 7th consecutive week. As usual, Anupamaa is followed by Ghum Hai Kisikey Pyaar Meiin and Imlie on numbers two and three respectively. On number four is Indian Idol 12. At the bottom of the list is Yeh Hai Chahtein.Also Read - Anupamaa Big Twist: Pakhi Insults Kinjal-Nandini, Calls Them 'Anupama Ki Chamchi'

Take a look at the top 5 shows this week:

Anupamaa: It is undoubtedly one of the most loved shows on television. For the seventh week in a row, Anupamaa is on the top of the TRP list. This also comes amid the speculations that there will soon be a new entry in the show who will also be Anupamaa’s love interest. The show features Rupali Ganguly and Sudhanshu Pandey.

Imlie: For another week, Sumbul Touqeer and Gashmeer Mahajani starrer has kept the audience glued to the show and have managed the third spot.

Indian Idol 12: Even after facing backlash following Ashish Kulkarni’s elimination, the show managed to retain its fourth spot. While it has been announced that the singing reality show is coming to an end, the grand finale date is on August 15. Currently, the top six contestants are Pawandeep Rajan, Shanmukha Priya, Mohd Danish, Sayli Kamble, Arunita Kanjilal, and Nihal Tauro.

Yeh Hai Chahtein: While the Sargun Kaur Luthra and Abrar Qazi starrer show entered the top five list a few weeks ago, the show is now on the fifth spot leaving behind Super Dancer Chapter 4. 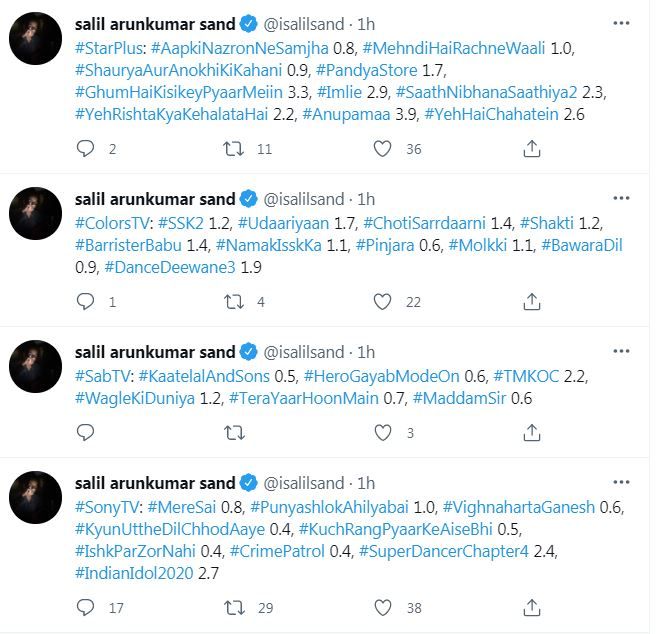