Amaal Mallik Says ‘I am Not Anu Malik, I am a New Mallik’ When Asked How he Reviews Contestants on Reality Show

Singer Amaal Mallik says he can't be as harsh as his uncle Anu Malik is on his reality shows.

Music composer and singer Amaal Mallik, who has taken up the duties of a judge in a reality show, says that he is quite sensitive towards the young participants of the show Sa Re Ga Ma Pa L’il Champs while making critical comments on their singing performances as opposed to his uncle Anu Malik. Also Read - Anu Malik Sexual Harassment Case: Sona Mohapatra Lashes Out at NCW, Says 'Felt Like I Was Criminal'

Talking about his new role as a judge and how he is handling eliminations, Amaal told IANS: “Look, I am not Anu Malik, I am a new Mallik…(laughs) so, I am really sensitive towards kids and whenever I comment on a participant’s performance in a critical manner, I make sure that I am honest but not harsh because at the end of the day, they are children.” Also Read - NCW Gives Anu Malik a Clean Chit in Sexual Harassment Case Due to 'Lack of Communication/Substantial Evidence'

Amaal is the nephew of singer-composer Anu Malik, who judged a singing-based reality show Indian Idol last year till he was accused of sexual harassment. While judging, some felt that Anu used to make harsh comments. Also Read - Anu Malik Speaks on Quitting Indian Idol 11 Following #MeToo Allegations, Says 'Channel Wanted me Back But I Decided to Take a Break'

Sa Re Ga Ma Pa L’il Champs, which will premiere on February 9 on Zee TV, offers a platform to young singers between the age of 5 and 15. 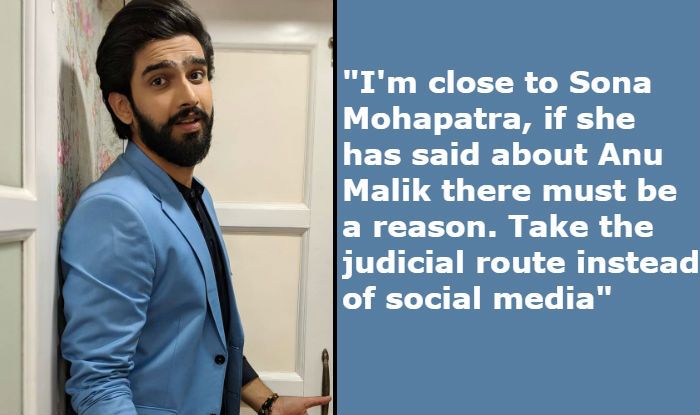 Asked if the system of elimination is heartbreaking, Amaal said: “Honestly, we have to look at the whole process very objectively. There is a talent that needs little more practice to compete at a certain level and when we eliminate them, that means they are going to be better when they take part in competition next time.

“The platform will remain, opportunities will come, but talent can make it to the top if only well prepared.”

Amaal started his career in 2014 in Bollywood. He has made hit songs like Sooraj dooba hain, Main hoon hero tera and Aashiq surrender hua.

He is co-judging along with singers Richa Sharma and Shaan. He is one of the youngest judges of the show. Asked about his contribution, Amaal said: “I have got a chance to help them to become the singing stars of tomorrow, I am happy.”