Here's the latest TRP BARC report and The Kapil Sharma Show is back with a bang!

BARC report of week 1 (from Saturday, 29th December 2018 to Friday, 4th January 2019) of 2019 is out and leading the list is Kumkum Bhagya. However, what is striking about the TRP result this time is Naagin 3 slipping down and The Kapil Sharma Show making an entry into the top five. The list has Star Screen Awards 2018 on the second position, followed by Super Dancer Chapter-3 on the third, Kundali Bhagya on the fourth and The Kapil Sharma Show on the fifth position. The shows on the list after the fifth position are Taarak Mehta Ka Ooltah Chashma and Naagin 3 among others. Here’s the list: Also Read - Kapil Sharma Body-Shames Twitter User For Saying He'd be Arrested Soon Like Bharti Singh in Drugs Case 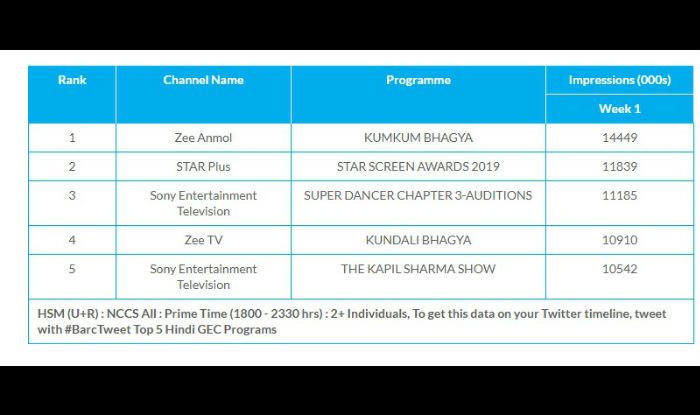 Congratulatory messages for Kapil and team are pouring in on social media for fighting the TRP battle well. Actor Jay Bhanushali wished the comedian and wrote, “Congratulations @KapilSharmaK9 @SonyTV @001Danish @deepak30000 @Banijayasia for a massive 1st week opening of #TheKapilSharmaShow so happy to see the show is back with a bang 3.5 &3.3 awesome” (sic). Kapil also instantly replied. Also Read - Bharti Singh Comes Out of Jail After Being Arrested in Bollywood Drug Case - First Pictures

One of the actors on The Kapil Sharma Show, Bharti Singh also expressed her happiness over finding a place in the top five. She wrote on Instagram, “Thank you India for the love and making us number 1 show on TV. We are overwhelmed. We are back & We will keep India entertaining this way! #TKSS #Gratitude @kapilsharma @sumonachakravarti @chandanprabhakar @krushna30 @sonytvofficial @kikusharda” (sic)

The Kapil Sharma Show premiered on Sony Television on December 23. The first episode, featuring Ranveer Singh and Rohit Shetty was received well by the audience. The latest episode had Salman Khan, Arbaaz Khan, Sohail Khan and Salim Khan as guests. The fans are happy to see Kapil has returned on TV with a bang. The show also features Krushna Abhishek, Rochelle Rao, Chandan Prabhakar, Kiku Sharda and Navjot Singh Sidhu among others. It will be interesting to see how the last weekend performed in terms of the TRPs. Naagin 3 has retained a slot in top five since very long now.